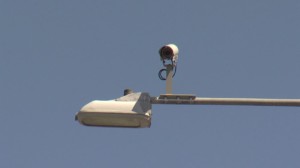 If approved, the police would have access to the 24-hour footage.

OCEANSIDE (KUSI) – Oceanside police are asking the city to approve a $500,000 allocation to buy 54 surveillance cameras it wants to install around the city.

If approved, the police would have access to 24-hour footage of high-traffic areas downtown. The money for the surveillance system would come from Measure X, a sales tax increase approved by voters in 2018, Fox5 reported.

The proposal is on the Wednesday City Council meeting agenda, the station reported.

City staff and the Police and Fire Commissions have recommended approval of the measure, buying the cameras and related storage system from Lake Forest-based Discover IT Solutions, the station reported.

Police claimed the system would store video for up to a year and be deleted, and that the cameras would only monitor public spaces.

The plan still raises questions about privacy, Bussey told the station. “This isn’t Big Brother watching, that kind of thing,” he claimed. “It’s not something we’re going to be looking at all the time,” he added.