BALTIMORE (KUSI) — Baltimore police Officer Edward Nero was found not guilty of all charges relating to the arrest and death of Freddie Gray, a young black man who died after being injured in police custody.

Nero was one of six Baltimore police officers that was charged in the case of Freddie Gray.

Gray died last year—a week after his neck was broken in the back of a police van where he was handcuffed and shackled, but left unrestrained by a seat belt.

His death set off days of violent protest against police corruption and fueled the Black Lives Matter movement.

Now that the trial is over, Nero will face administrative review by the Baltimore Police Department, Baltimore Mayor Stephanie Rawlings-Blake said in a statement. She continued that if there is "disturbance in the city, we are prepared to respond." 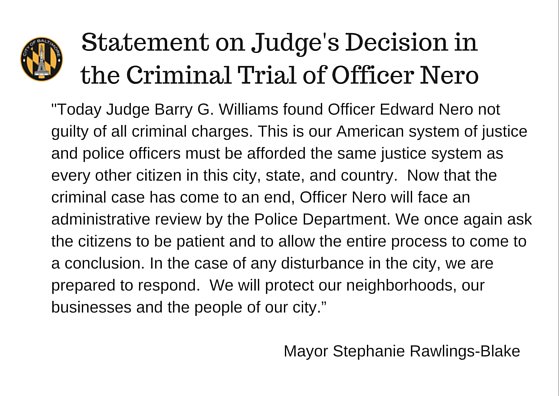 Nero was the second officer to be tried. He waived his right to a jury, instead arguing his case before a judge. The first officer’s trial ended in a hung jury in December.