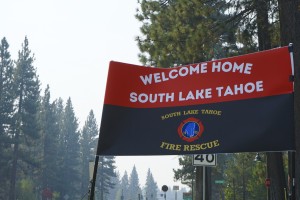 A sign outside a South Lake Tahoe Fire Station welcomes residents back to town after the lifting of the evacuation order Monday, Sept. 6, 2021. The resort town of some 22,000 was cleared last week due to the Caldor Fire. (AP Photo/Samuel Metz)

SOUTH LAKE TAHOE, Calif. (AP) — Crews are still fighting wind-swept flames in some parts the wildfire south of Lake Tahoe, but officials said Monday that they’re planning to prepare to repopulate parts of the resort community that remain under evacuation order.

The Caldor Fire was 48% contained as of Monday evening, which was enough to allow residents of the city of South Lake Tahoe to return to their homes.

Winds have been easing, allowing firefighters to make progress containing the flames, but fire officials remain concerned about winds threatening their progress.