Officials: Some who went to huge Sturgis rally have COVID-19

SIOUX FALLS, S.D. (AP) — South Dakota health officials warned Thursday that a number of people who attended the 10-day Sturgis Motorcycle Rally this month, including some who came from out of state, have come down with COVID-19.

Department of Health officials did not give an exact number of rallygoers who tested positive, but they said it was under 25. The rally, which ended Sunday, brought hundreds of thousands of people from far and wide to the city in the western part of the state. Even before it kicked off, some locals and officials expressed concern that COVID-19 could spread rapidly at the rally and that it would be hard to track rallygoers who got infected before heading home.

The state’s health department has received reports from other states that people who traveled from the rally have tested positive, state epidemiologist Josh Clayton said.

Contact tracers have been able to work with most people to determine who they were around and may have infected. But the health department has issued public warnings for two bars — one in Sturgis and the other at a popular stop for riders along U.S. Highway 385 near Mount Rushmore. Clayton said they did not know how many people were exposed at the bars.

The health department did not immediately reply to a question about what other states have reported infections in people who attended the rally.

Sturgis is planning to conduct mass testing of its residents next week in an attempt to stem a possible outbreak of infections from the rally.

The rally news comes amid an increase in the COVID-19 infection rate in South Dakota. Health officials reported Thursday that there were 125 new confirmed cases of the disease and two new deaths. Over the past two weeks, the average number of daily new cases has increased by 32, which is an increase of about 43%.

The Blue Frog Band performed at the event in Sturgis and a member of the band Patrick Ellis, who is also a former Navy Seal Master Chief, joined Good Morning San Diego to share his experience at the event. 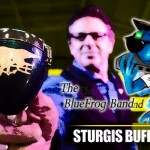 With schools in the state set to welcome back students to the classroom in the coming days, health officials said they plan to track and release data on infections among students, teachers and staff. They have found fewer than 40 school-related cases statewide so far, but they said they would not be breaking those infections down by the school districts where they occurred.

Clayton said the schools will notify students and parents when they find cases, but the health department is reporting the total number of cases to give a statewide view on infections in schools.

Since the pandemic started, South Dakota has had 10,691 confirmed cases of COVID-19. The state’s death toll from the disease caused by the coronavirus stands at 157.