WASHINGTON (AP) — Back in January, the Democrats welcomed their brash young newcomers to Congress with smiles and hugs. That was before the new colleagues dragged the party’s simmering divisions over Israel out in the open.

Provocative comments from Rep. Ilhan Omar of Minnesota have thrust the Democrats into an uncomfortable debate over Israel policy a few weeks before a high-profile conference at which senior Democrats typically make a show of support for the Jewish state. Increasingly, the rift appears as much generational as ideological, with newly elected Democrats showing less deference to the party line.

It is shameful that House Democrats won’t take a stronger stand against Anti-Semitism in their conference. Anti-Semitism has fueled atrocities throughout history and it’s inconceivable they will not act to condemn it!

Omar became the flash point after she suggested last week that Israel’s supporters are pushing U.S. lawmakers to take a pledge of “allegiance to a foreign country.” It’s at least the third time she has forced older, pro-Israel Democrats who run the House into awkward territory over U.S.-Israeli policy.

This time Omar is not apologizing. And this time pro-Israel Democrats led by Speaker Nancy Pelosi are not just warning her about the dangers of Jewish tropes. They are expected to offer a resolution condemning anti-Semitism on the House floor. Although no vote on the resolution is yet scheduled, Democrats said it could come as soon as Thursday. 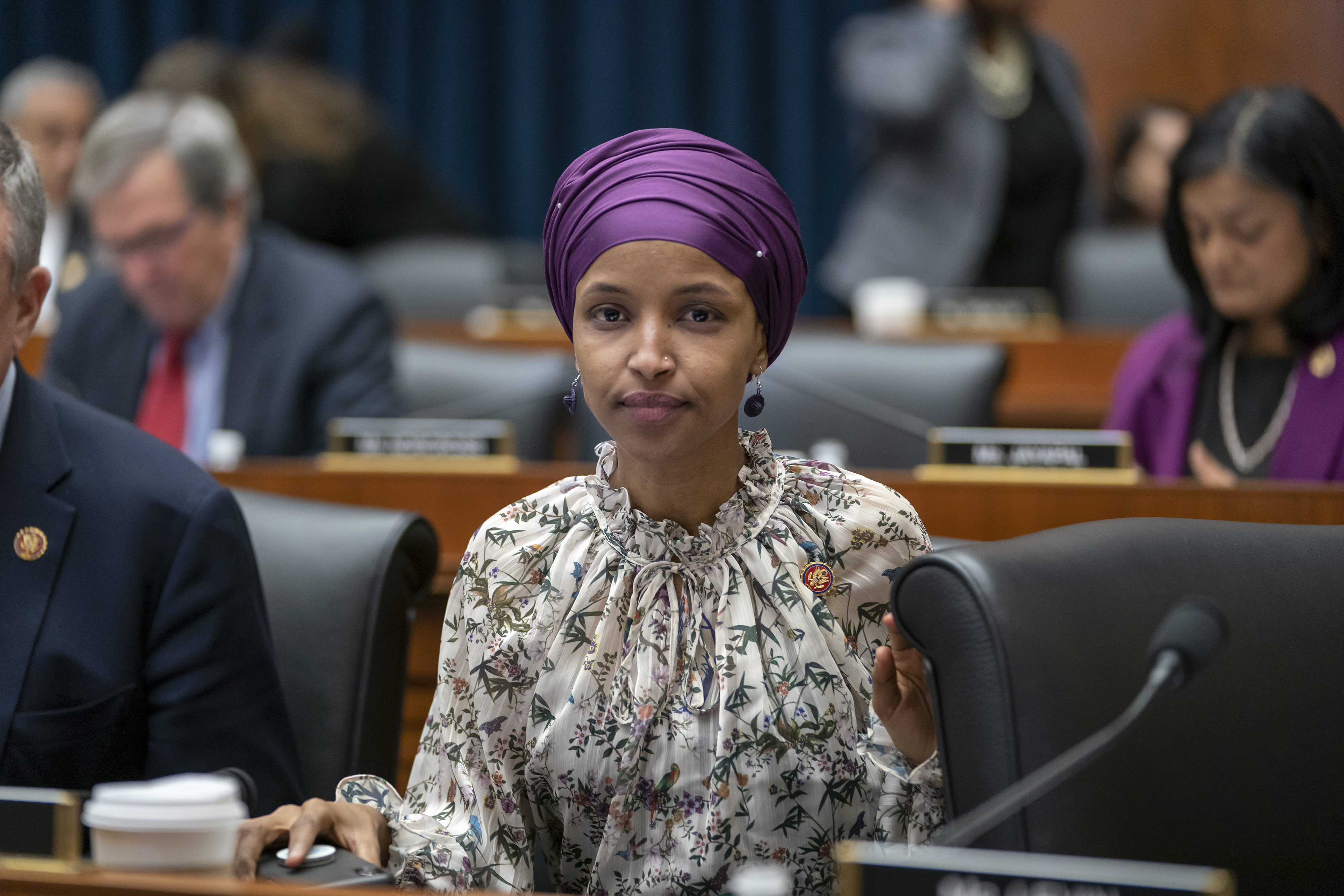 Rep. Ilhan Omar, D-Minn., sits with fellow Democrats on the House Education and Labor Committee during a bill markup, on Capitol Hill in Washington, Wednesday, March 6, 2019. Omar stirred controversy last week saying that Israel’s supporters are pushing U.S. lawmakers to take a pledge of “allegiance to a foreign country.” Omar is not apologizing for that remark, and progressives are supporting her. (AP Photo/J. Scott Applewhite)

Republicans have been happy to stoke the furor, with President Donald Trump tweeting it’s “shameful that House Democrats won’t take a stronger stand against Anti-Semitism in their conference.” Trump himself faced such criticism in 2016 for circulating a six-pointed star alongside a photo of Hillary Clinton, a pile of money and the words “most corrupt candidate ever.”

Democratic leaders are in a bind, torn between a need to admonish Omar and their desire to defend one of the first Muslim women elected to Congress.

“Accusations of dual loyalty generally have an insidious, bigoted history,” an early draft of the resolution reads in part. “The House of Representatives acknowledges the dangerous consequences of perpetuating anti-Semitic stereotypes and rejects anti-Semitism as hateful expressions of intolerance that are contradictory to the values that define the people of the United States.”

Pelosi and Majority Leader Steny Hoyer announced in a meeting of leading Democrats late Tuesday that the text will be updated to include anti-Muslim bias, according to a senior Democratic aide who spoke on condition of anonymity to discuss the private meeting. Other Democrats said an outpouring of support for Omar prompted leaders to consider broadening the measure to avoid dissension. Omar did not speak to reporters outside her office on Tuesday evening.

“There is a lot emotional disquiet about the situation, and it’s a good time to restate our values,” said Rep. Jamie Raskin of Maryland, who is Jewish and a member of leadership, as he exited a meeting in Pelosi’s office. “That’s what I hope our resolution can do.”

The text, which includes a history of bigotry against Muslims and blacks as well as Jews, sounds unobjectionable by itself. But the fact that senior Democrats felt obliged to put the House on-record on the topic points to a transformation in the country — mostly among Democrats — about supporting the Jewish state.

In a poll by the Pew Research Center in January of last year, 46 percent of Americans said they sympathized more with Israel and 16 percent with the Palestinians in their Middle East discord.

Omar, a Somali-American, says that what she’s questioning is the influence game in Washington and she worries that anything she says about Israel and its treatment of Palestinians will be construed as anti-Semitic.

“Being opposed to (Prime Minister Benjamin) Netanyahu and the occupation is not the same as being anti-Semitic,” she tweeted on Sunday. “I am grateful to the many Jewish allies who have spoken out and said the same.”

Democrats in Congress remain largely supportive of Israel. Pelosi, for example, often attends the American Israel Public Affairs Committee conference in Washington, which is coming up this month.

Omar on Tuesday got a boost from allies who point out that she, too, has been the target of threats and bigotry.

Rep. Alexandria Ocasio-Cortez suggested in a tweet that her fellow freshman was being treated unfairly.

“No one seeks this level of reprimand when members make statements about Latinx + other communities,” the New York Democrat wrote.

“We are concerned that the timing of this resolution will be seen as singling out and focusing special condemnation on a Muslim woman of color as if her views and insensitive comments pose a greater threat than the torrent of hatred that the white nationalist right continues to level against Jews, Muslims, people of color and other vulnerable minority groups,” said J Street, a nonprofit that says it’s a home for “pro-Israel, pro-Peace Americans.”

Back home in Minnesota, a collection of elected officials started a #StandWithIlhan hashtag with a statement that reads in part: “We call on Democrats to stand with Ilhan against Republican efforts to pit Jews and Muslims against each other.”

But there also was talk of finding a candidate to challenge her in 2020.

“She is rapidly making herself a pariah in Congress, rather than an effective representative for her constituents,” said state Sen. Ron Latz, who is Jewish, lives in her district and has been critical of her recent statements on Israel.

Earlier this year, Omar apologized for a 2012 tweet in which she said Israel had “hypnotized” America. And last month, she apologized for suggesting that members of Congress support Israel because they are paid to do so.

That earned her stern rebukes from Pelosi and House Foreign Relations Committee Chairman Eliot Engel, among others. This time, Engel declared that Omar’s suggestion about divided loyalties was a “vile” stereotype that had no place on his committee.

Republicans demanded that Democrats throw Omar off Engel’s panel. There was no sign of that happening.

“I should not be expected to have allegiance/pledge support to a foreign country in order to serve my country in Congress or serve on committee,” Omar tweeted.