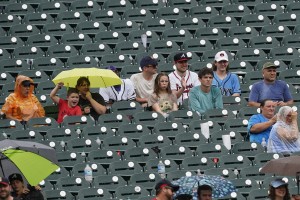 Baseball Fans sit in the rain as they watch a baseball game between the Atlanta Braves and the Tampa Bay Ray,s Sunday, July 18, 2021, in Atlanta. (AP Photo/John Bazemore)

ATLANTA (AP) — The game between the Atlanta Braves and San Diego Padres was postponed on Monday night because of rain and will be made up as part of a day-night doubleheader on Wednesday.

Wednesday’s first game will start at 12:20 p.m. as scheduled.

The makeup game will begin at 5:20 p.m. Yu Darvish was supposed to start for San Diego, against Atlanta rookie Kyle Muller.

The Padres were coming off a franchise-best, 41-run three-game series at Washington, but they had dropped three of five.

San Diego began Monday in third place and five games out in the NL West.

Atlanta, which won division titles the last three years, had dropped three of four and was in third place and four games out in the NL East.