Padres say Tatis should be able to avoid shoulder surgery 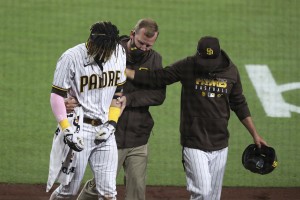 San Diego Padres manager Jayce Tingler, right, and a trainer help Fernando Tatis Jr, left, off the field after Tatis hurt his shoulder while swinging at a pitch in the third inning of a baseball game against the San Francisco Giants, Monday, April 5, 2021, in San Diego. (AP Photo/Derrick Tuskan)

SAN DIEGO (AP) — San Diego Padres shortstop Fernando Tatis Jr. should be able to avoid surgery on his left shoulder, the team said a day after he slightly dislocated it taking a hard swing.

An MRI on Tuesday showed a slight labral tear and the Padres put the electrifying 22-year-old on the 10-day injured list. General manager A.J. Preller said the club wasn’t ruling out anything, including Tatis’ possible return when he’s eligible.

Tatis winced in pain as he fell to the ground and cradled his left arm in Monday night’s game against San Francisco. Manager Jayce Tingler and a trainer held Tatis’ left arm against his body as he walked off the field.

According to Preller, doctors said another partially dislocated shoulder could occur again but playing this season wouldn’t put him at long-term risk.

“Everybody was very confident that surgery wasn’t the answer at this point in time,” Preller said. “We can keep him on the field here this year and be able to put him in a spot where he can be successful and not be in pain and we’re not doing any kind of long-term damage.”

Tatis experienced left shoulder discomfort twice during spring training, once after sliding headfirst into home plate and again several days later after making a backhanded play and a throw to first.

Poll: 15% of Americans worse off a year into pandemic

US to leave troops in Afghanistan beyond May, 9/11 new goal