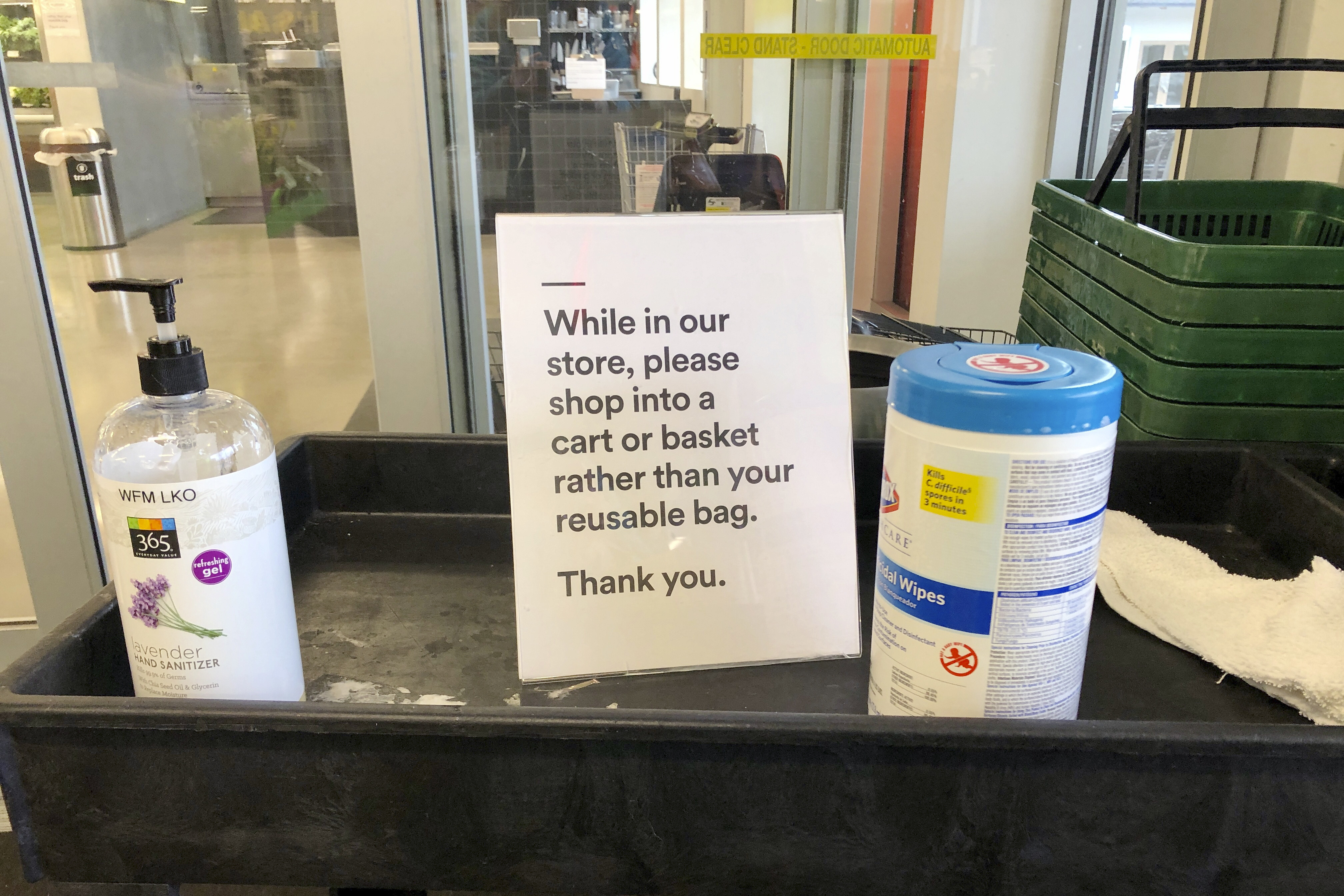 In this Sunday, March 29, 2020, photo, a sign posted at an entrance to a 365 Whole Foods store advises customers not to use their own bags while shopping in Lake Oswego, Ore. Just weeks earlier, cities and even states across the U.S. were busy banning straws, limiting takeout containers and mandating that shoppers bring reusable bags or pay a small fee. Grocery clerks are nervous that the virus could linger on reusable fabric bags and their unions are backing them up with demands to end plastic bag fees and suspend bag bans. The plastics industry has seized the moment, lobbying to overturn existing bans on single-use plastics. (AP Photo/Gillian Flaccus)

PORTLAND, Ore. (AP) — Just weeks ago, cities and even states across the U.S. were busy banning straws, limiting takeout containers and mandating that shoppers bring reusable bags or pay a small fee as the movement to eliminate single-use plastics took hold in mainstream America.

What a difference a pandemic makes.

In a matter of days, hard-won bans to reduce the use of plastics — and particularly plastic shopping sacks — across the U.S. have come under fire amid worries about the virus clinging to reusable bags, cups and straws.

Governors in Massachusetts and Illinois have banned or strongly discouraged the use of reusable grocery bags. Oregon suspended its brand-new ban on plastic bags this week, and cities from Bellingham, Washington, to Albuquerque, New Mexico, have announced a hiatus on plastic bag bans as the coronavirus rages.

Add to that a rise in takeout and a ban on reusable cups and straws at the few coffee stores that remain open, and environmentalists worry COVID-19 could set back their efforts to tackle plastic pollution for years.

“People are scared for their lives, their livelihood, the economy, feeding their loved ones, so the environment is taking a back seat,” said Glen Quadros, owner of the Great American Diner & Bar in Seattle.

Quadros has laid off 15 employees and seen a 60% decline in business since Seattle all but shut down to slow the pandemic. For now, he’s using biodegradable containers for takeout and delivery, but those products cost up to three times more than plastic — and they’re getting hard to find because of the surge in takeout, he said.

“The problem is, we don’t know what’s in store,” Quadros said. “Everyone is in the same situation.”

The plastics industry has seized the moment and is lobbying hard to overturn bans on single-use plastics by arguing disposable plastics are the safest option amid the crisis. California, Connecticut, Delaware, Hawaii, Maine, New York, Oregon and Vermont have statewide bans on plastic bags, and Oregon and California have laws limiting the use of plastic straws.

New York’s statewide plastic bag ban is on hold because of a lawsuit.

The Plastics Industry Association recently sent a letter to Alex Azar, head of the U.S. Department of Health and Human Services, and asked him to speak out against plastic bag bans because they put consumers and workers at risk. And the American Recyclable Plastic Bag Alliance is doubling down on its opposition to plastic bag bans under a preexisting campaign titled Bag the Ban.

Grocery worker unions, too, have joined the chorus. The union that represents Oregon supermarket workers is lobbying for a ban on reusable bags, and a Chicago union called for an “end to the disease-transmitting bag tax.”

“If those bags coming into the store are contaminated with anything, they get put on the conveyor belt, the counter, and you’re putting yourself in a bad spot,” said Matt Seaholm, executive director of the American Recyclable Plastic Bag Alliance. “It’s an unnecessary risk.”

A study by the U.S. National Institutes of Health found the novel coronavirus can remain on plastics and stainless steel for up to three days, and on cardboard for up to one day. The Centers for Disease Control and Prevention says it appears possible for a person to get COVID-19 by touching a surface that has the virus on it and then touching their mouth, nose or eyes — but it’s not thought that’s the main way the virus spreads.

More studies are needed to fully assess the dangers posed by reusable bags, which are mostly made of fabric, said Dr. Jennifer Vines, lead health officer for the Portland metropolitan area.

“It’s not clear that a virus that you can find on a surface — whether it’s cloth or something else — is viable and can actually make you sick,” she said.

For most people, the new coronavirus causes mild or moderate symptoms, such as fever and cough that clear up in two to three weeks. For some, especially older adults and people with existing health problems, it can cause more severe illness, including pneumonia and death.

Some stores such as Trader Joe’s and Target are letting customers use their own bags if they sack their groceries themselves, while others are banning them.

In Oregon, temporary rules now allow disposable “T-shirt” plastic bags with no fee to customers. Many stores ran out of paper bags amid a run on groceries, accelerating the move to ease plastic restrictions, said Joe Gilliam, president of the Northwest Grocery Association, which represents 1,000 retail locations in Oregon, Washington and Idaho.

“There are some stores out there that are saying, ‘For the time being, please don’t bring those in.’ Other stores are allowing them, but … right now we’re asking that only freshly laundered ones come in,” he said.

Environmental groups, well aware of the nation’s current priorities, were at first unusually silent on moves to temporarily roll back plastic bag bans. But they responded forcefully after the plastics industry asserted bag bans could worsen the pandemic’s toll.

“The fear-driven gains the industry was able to win this month are likely to be extremely short-lived,” said John Hocevar, of Greenpeace USA. “The movement away from throwaway plastic is the kind of awakening that is not going to be that easy for the plastic industry to stop.”

In the meantime, some consumers are getting taken by surprise.

Paul McNamara, who has used his own bags for a decade, said he was stopped at the entrance of his regular market in Hopkinton, Massachusetts, after the state enacted a temporary ban on reusable shopping sacks. His ratty bags have corners reinforced with duct tape from years of use; he instead left with his groceries in plastic bags.

“My question would be, will it become permanent?” McNamara said. “I’m fine with the restrictions on reusable plastics. It makes a lot of sense, and that’s the way to go for the environment. But if it’s a public health issue, we’ve got to figure out some way to deal with it.”

The Latest: WHO official watching for rise in virus deaths

How risky is dining out during the COVID-19 pandemic?