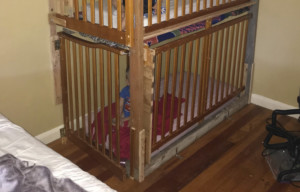 FILE – In this April 19, 2019, file photo, provided by the Modoc County Sheriff’s Office, two boys sit in enclosed cribs in a Tulelake, Calif., home. Prosecutors in Northern California say the parents of the children found inside enclosed cribs bolted to a bedroom will not face child endangerment charges. Modoc County District Attorney Sam Kyllo tells the Record Searchlight there is no evidence that the children were being cared for inappropriately. (Modoc County Sheriff’s Office via AP, File)

Modoc County District Attorney Sam Kyllo said there was no evidence the children — both under 2 — were being cared for inappropriately, the Record Searchlight reported Wednesday.

“I don’t see it as personally an acceptable way of housing your children, but that doesn’t necessarily violate a law,” he said.

Ramon Zendejas, 25, and his girlfriend, Mercadies Williams, also 25, were arrested last week after deputies found the boys in what the sheriff’s office described as cribs modified to be “like dog crates.”

Deputies found three guns and some evidence of a possible cannabis oil lab in the house, Sheriff Tex Dowdy said. However, he said there was no proof that manufacturing was taking place inside the house.

Dowdy called the enclosed cribs “heinous” but said he agrees with Kyllo that there was not enough evidence that anything illegal was going on.

Zendejas will face charges of a felon being in possession of a firearm and one count of possessing a small amount of methamphetamine, Kyllo said.

Williams faces a misdemeanor because she wasn’t allowed to have a firearm.