Partner of SDPD officer slain in 2016 testifies at murder trial 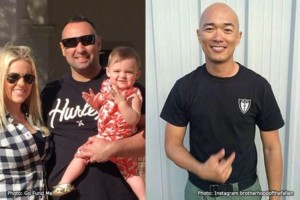 SAN DIEGO (KUSI) – The partner of a San Diego police officer who was fatally shot five years ago testified Tuesday that the shooter “immediately” opened fire on him as soon as he stepped out of his patrol car, striking him in the throat, then advanced on his partner, firing multiple times from close range.

Wade Irwin took the stand Tuesday in the trial of Jesse Michael Gomez, 60, who is charged with shooting Irwin and killing Officer Jonathan “J.D.” De Guzman, 43, on the night of July 28, 2016.

De Guzman, a 16-year veteran of the San Diego Police Department, died at a hospital, while Irwin was hospitalized for nearly a month.

Prosecutors are seeking the death penalty for Gomez, which he could face if convicted of murder and a special circumstance allegation of murder of a police officer. He also faces an attempted murder count for allegedly shooting Irwin.

Irwin testified that while he and De Guzman were patrolling Acacia Grove Way, Gomez and another man split up and started walking along the north and south sidewalks of the street.

Irwin said Gomez was about 10 feet away from the police car when he looked in its direction. De Guzman then turned the car around and slowly followed Gomez, who Irwin said was “clearly looking over his shoulder” at the patrol car several times.

Gomez’s defense attorneys have alleged that their client did not know the black-and-white squad car approaching him in a “gang-infested neighborhood” was a police vehicle, and that he fired on the uniformed officers approaching him out of fear.

Irwin, who said he believed at the time that Gomez was another man he’d previously arrested, said he got out of the car and asked, “Do you live in the area?” The officers did not activate their lights, sirens or spotlights because the man was not being detained, Irwin said.

The man, who Irwin said faced him with an “angry, hateful look on his face,” then “immediately” raised his hand and shot Irwin in the throat, before walking toward the police car and firing multiple times on De Guzman, he testified. Irwin said Gomez got to within one to two feet from the police car when he was shooting at De Guzman.

After he was shot, Irwin fell into a seated position against the car. Through tears, he testified that he thought of his wife and young daughter in that moment.

“I believed at that time that if the defendant saw that I was alive, that I would be executed,” Irwin testified. “I didn’t want to die. I knew that if I was going survive this, I was going to have to fight to stay alive.”

After De Guzman was shot, Irwin drew his gun and fired across his body at the shooter, who ran eastbound.

A blood trail from the shooting scene led police to Gomez, who was found unconscious in a ravine off South 38th Street, a short distance from the scene. He was hospitalized with a gunshot wound to his upper body.

Deputy District Attorney Valerie Summers alleged in her opening statement that Gomez, who had prior run-ins with the law and was illegally carrying a firearm when he was contacted, was not going to risk going to jail again.

“He knows the consequences and he makes a decision. ‘Not tonight,”‘ Summers said.

One of Gomez’s attorneys, Jessica Petry, said the officers did not clearly identify themselves as law enforcement upon contacting him and approached him from behind as he was walking through an area rife with gang activity.

Petry said the question Irwin posed to him, something to the effect of “Where are you from?” is a challenge and/or threat commonly made by gang members seeking rivals to target, which “almost always precedes violence” and is “a frightening lose-lose proposition” for anyone confronted with the question.

She also noted that Gomez was under the influence of methamphetamine at the time, which she said can result in enhanced paranoia and false perceptions.

“Jesse Gomez fired that gun because he thought he was going to die,” Petry said.

Gomez’s trial is expected to last as long as two months. Irwin’s testimony was scheduled to resume Tuesday afternoon.