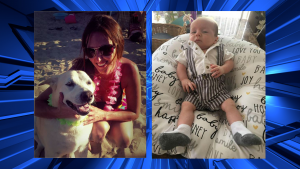 SAN DIEGO (KUSI) – The deaths of a mother and her toddler son in a fall from a third-floor concourse at Petco Park prior to a San Diego Padres game last fall have been ruled a murder-suicide, authorities reported Wednesday.

Raquel Wilkins, 40, and 2-year-old Denzel Browning-Wilkins died shortly before 4 p.m. Sept. 25 on the sidewalk where they landed in the 200 block of Tony Gwynn Way, on the west side of the downtown ballpark, according to the San Diego Police Department.

“Detectives conducted a thorough and comprehensive investigation that included dozens of interviews, reviewing of available video footage and collecting background information to determine what led to the deaths,” SDPD Lt. Andra Brown said. “In consultation with the San Diego County medical examiner, Raquel Wilkins’ death has been classified a suicide, and Denzel Browning-Wilkins’ death has been classified a homicide.”

Officials declined to disclose what might have motivated the San Diego woman to leap off the side of the structure while holding her son.

“The San Diego Police Department will not be making any further comment on the case,” the lieutenant said.

Witnesses told news crews Wilkins climbed on a picnic bench on the concourse and fell to the ground, then climbed back on the seat a short time later with her child and went over a protective railing at the edge of the ballpark.