Police looking for suspect in assault at Midway-Area Arby’s 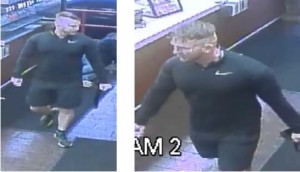 SAN DIEGO (KUSI) – Authorities reached out to the public Thursday for help in identifying and locating a man who savagely beat a fellow customer at a Midway-area fast-food restaurant in violence apparently sparked by road rage.

The assailant, seemingly angry with the other man for cutting him off while they were parking their cars outside the Arby’s in the 3700 block of Midway Drive about 7 p.m. Monday, got into a confrontation with him after they entered the business, according to San Diego police.

During an ensuing argument, the enraged man punched the victim eight times in the head, sending him collapsing to the floor. The attacker then stomped on the other man’s head with his feet before leaving the eatery and driving off in a vehicle of unknown type.

Medics took the victim to hospital, where he was treated for an orbital fracture, police said.

A surveillance camera inside the restaurant captured images of the assailant, a muscular white man about 30 years old with close-cropped hair shaved off completely on the sides of his head. At the time of the assault, he was wearing black shorts, a long-sleeved black Nike-logo shirt and black tennis shoes with white soles.

Anyone with information about the case is asked to call San Diego County Crime Stoppers at 888-580-8477 or contact the agency online at sdcrimestoppers.org. Tipsters can remain anonymous and may be eligible for a reward of up to $1,000.

The Latest: Australians draw parallels to inequality in U.S.