SAN DIEGO (KUSI) –  Authorities reached out to the public Thursday for help in tracking down a man who attacked a stranger without provocation near Horton Plaza last month, leaving him hospitalized with serious head injuries. 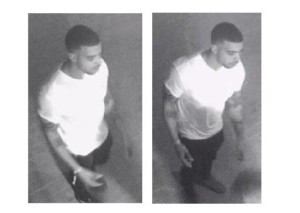 The victim was standing in front of Andaz Hotel in the 600 block of F Street in the Gaslamp district of downtown San Diego when five men approached about 2:30 a.m. March 15, according to police.

As the group was walking past the victim, one of them stopped and punched him for unknown reasons, causing him to stumble backward and fall to the ground.

The assailant started to leave, but, seeing the man get back to his feet, doubled back and struck him in the face a second time. The victim again fell back, striking his head on the pavement. The attacker and his cohorts then left the area.

The victim, whose name was withheld, suffered a broken cheekbone and needed cranial surgery, including the attachment of a metal plate to his skull, police said.

Surveillance cameras captured images of the assailant, who is described as a muscular black man in his early 20s with short hair, a goatee and tattoos on both arms.

Anyone with information about the assault is asked to call San Diego County Crime Stoppers at 888-580-8477 or contact the agency online at sdcrimestoppers.org. Tipsters may remain anonymous and could be eligible for a reward of up to $1,000.