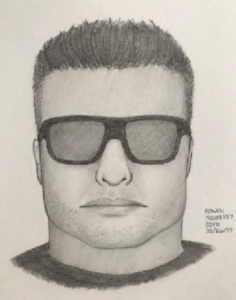 SAN DIEGO (KUSI) – Authorities reached out to the public today for help in identifying and tracking down a man who held a knife to a woman’s throat while robbing her at the Fashion Valley mall, then drove off in her car.

The 57-year-old victim was walking to her car around 1:45 p.m. Monday in a parking lot outside the JCPenney store on the west side of the Friars Road shopping center when the thief approached her from behind, put the blade of a knife to her neck and demanded her wallet and keys, according to San Diego police.

After she complied with his demands, the thief drove off southbound on Fashion Valley Road in her 2017 Nissan Sentra, which has since been recovered, police said.

Investigators released a composite sketch of the suspect, described as Hispanic, 30 to 35 years old, between 5 feet 8 and 5 feet 9 inches tall, with brown hair.

Anyone with information about the suspect was urged to call the San Diego Police Department’s robbery unit at (619) 531-2299 or San Diego County Crime Stoppers at (888) 580-8477. Tipsters may remain anonymous and could be eligible for a reward of up to $1,000.

Elections are around the corner, what can leaders do to help homelessness and crime?