SAN DIEGO (KUSI) – The Port of San Diego has sent out a press release announcing the successful completion of a lighting study they conducted on the San Diego-Coronado Bay Bridge. The press release detailing the study can be read below:

The Port of San Diego has successfully completed an engineering lighting study to test and evaluate the potential use of color-changing LED lights to illuminate the San Diego-Coronado Bay Bridge. The tests were conducted on the evenings of April 29 through May 2, 2019 as part of the design development process for the proposed San Diego-Coronado Bay Bridge Lighting Project. The study focused on a small portion of the bridge structure located over land near Barrio Logan.

The study was designed to simultaneously illuminate two of the bridge’s supporting concrete piers with color LED lighting units (luminaires) provided by two leading manufacturers of architectural lighting products—Philips Color Kinetics and Lumenpulse.  To effectively illuminate the approximately 165-foot tall piers, sets of LED lights were mounted at ground level, beaming upward, and with the use of boom lifts positioned near the tops of the piers, beaming downward. The study allowed the Port to observe, evaluate and collect data related to the output and performance of the lights over a broad range of the color spectrum and at varying intensities. The lighting displayed during the tests did not, however, represent any particular lighting configurations or scenarios being envisioned for the final bridge lighting design.

“This is the first time the Port has been able to field test how well the colored LED lighting units would actually perform in illuminating the bridge structure, and we are very pleased with the results,” said Port Commissioner Marshall Merrifield. “From what we have seen so far, we know that the lights will be able to provide a variety of gradations and hues and ultimately create a beautiful example of public art that can be enjoyed by everyone.”

Observations and data collected during the study will assist with refinement of the proposed bridge lighting design, including the types, quantities, and placement of lights on the bridge. It is envisioned that when the project is fully approved and funded, approximately 30 of the bridge piers supporting the span from the Coronado shoreline to a point near Harbor Drive in San Diego would be illuminated with computer programmed color LED lighting.

The data and lessons learned from this successfully completed engineering lighting study will inform the next step in the design development process, which would be to conduct a full-scale mock-up of the updated lighting configuration for testing and validation from the technical, artistic, and operational point of views. It is envisioned that the mock-up field test would illuminate four adjacent bridge piers located near the center span. Such tests could occur in late 2019 or early 2020 and would be clearly visible to the general public over a period of several consecutive nights.

The Port of San Diego’s proposed Bridge Lighting Project is currently in the midst of Phase 2 in which the objectives are to update and refine the design, obtain environmental clearance through the California Environmental Quality Act (CEQA) process, and acquire all applicable agency approvals and entitlements. There will also be extensive community outreach and opportunities for public comment.

The proposed project is estimated to cost between $14 and $16 million, funded through a Port-led fundraising campaign. Currently, about $1 million in contributions has been raised in the fundraising effort.

Architectural lighting designers Speirs & Major, BuroHappold consulting engineers, and artist Peter Fink are designing the lighting project, which is anticipated to be completed in 2022.

ABOUT THE PORT OF SAN DIEGO

The Port champions Maritime, Waterfront Development, Public Safety, Experiences and Environment, all focused on enriching the relationship people and businesses have with our dynamic waterfront. From cargo and cruise terminals to hotels and restaurants, from marinas to museums, from 22 public parks to countless events, the Port contributes to the region’s prosperity and remarkable way of life on a daily basis. 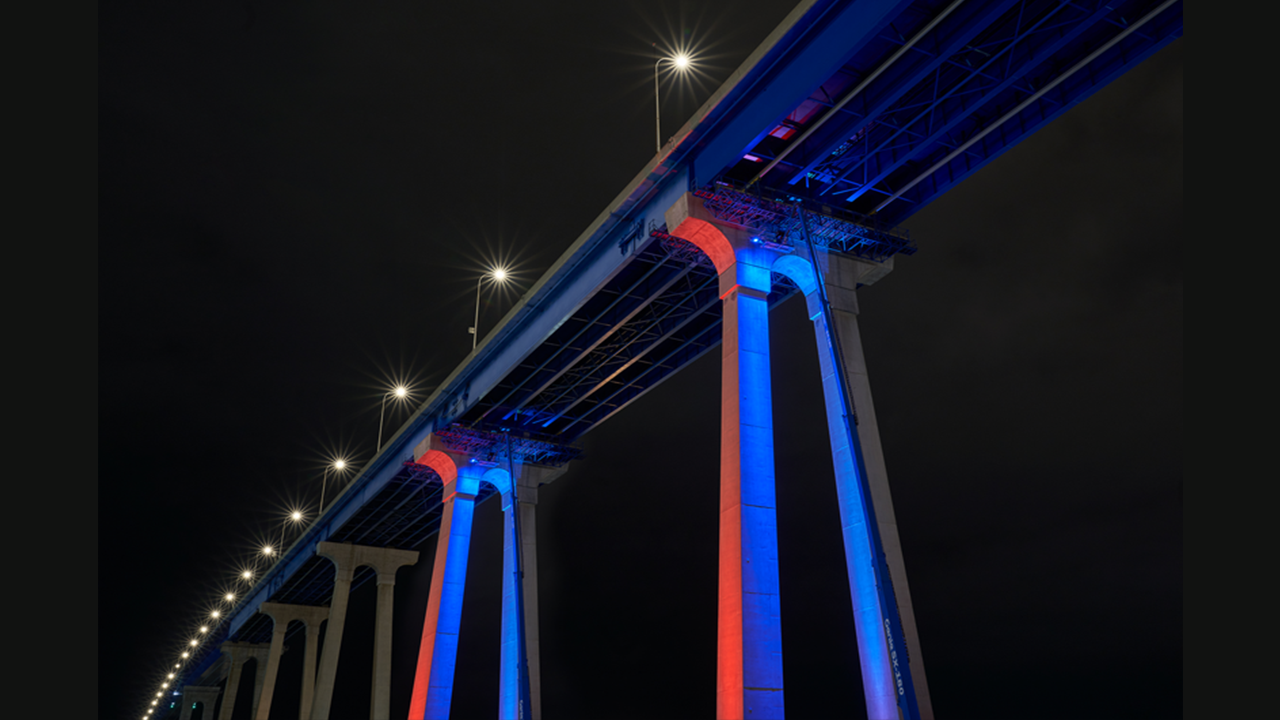