President Trump is expected to declare a National Emergency for the United States of America amid the coronavirus pandemic.

Watch: President Trump is declares a National Emergency for the United States of America amid the coronavirus pandemic.

WASHINGTON (AP) — The United States declared a state of emergency Friday as many European countries went on a war footing amid mounting deaths as the world mobilized, hopefully not too late, to fight the widening coronavirus pandemic.

At the White House, where U.S. President Donald Trump made the emergency decree, drug company executives vowed to work together and with the government to quickly expand the country’s coronavirus testing capabilities, which are far behind those in many countries.

“We will defeat this threat,” Trump told a news conference. “When America is tested America rises to the occasion.”

While the exponential spread of the virus in Europe, North America and the Middle East has dashed any hopes for quick containment, dozens of countries have imposed increasingly severe measures over the past couple days — shutting borders, expanding testing, closing school for tens of millions of children and ordering tens of thousands of businesses to close their doors — to try to face down the disease. 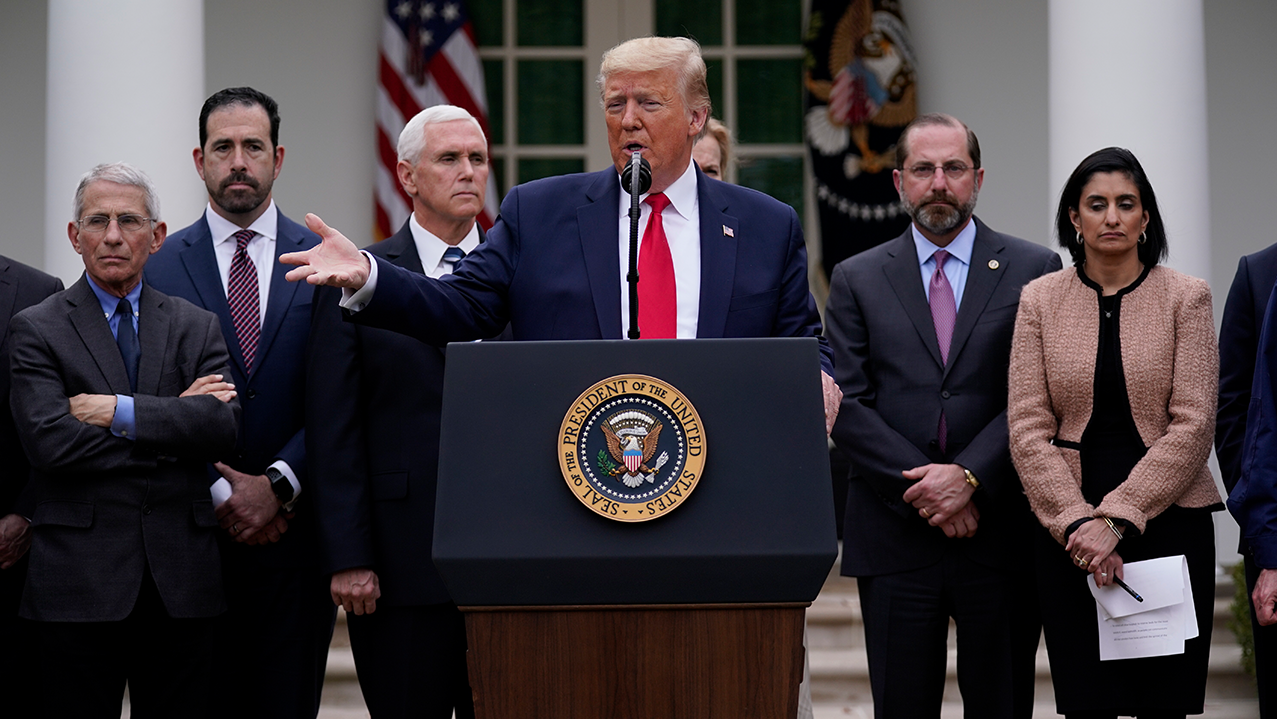 President Donald Trump speaks during a news conference about the coronavirus in the Rose Garden of the White House, Friday, March 13, 2020, in Washington. (AP Photo/Evan Vucci)

The U.S. emergency decree will open up $50 billion for state and local governments to respond to the outbreak, said Trump, who also gave the secretary of health and human services emergency powers to waive federal regulations to give doctors and hospitals “flexibility” in treating patients.

Trump’s announcement came as tens of millions of students on three continents faced weeks without classes, security forces went on standby to guard against large gatherings, and bars, restaurants and offices closed.

The spreading pandemic showed that power and influence offer no protection. Among those testing positive were the Canadian prime minister’s wife, a top aide to Iran’s supreme leader, Miami’s mayor, a Brazilian official who met with Trump, and an Australian Cabinet minister who met with the U.S. attorney general and Trump’s daughter, Ivanka.

Channeling wartime rhetoric and tactics in the face of a microscopic enemy, leaders appealed for solidarity to battle a threat that appeared to expand exponentially. They vowed to protect not just the sick, but those sacrificing their livelihoods and education for the greater good. But new border checks were also on the rise, showing that solidarity had its limits in the face of a fast-moving threat.

In Europe, stocks clawed back some of their losses with promises of financial support from the European Commission, France and Germany, while in the U.S., stocks surged after Trump’s announcement. The Dow Jones Industrial Average jumped nearly 2,000 points — its biggest point gain ever. The rally came at the end of a turbulent week fueled by heightened fears that the coronavirus fallout could bring on a global recession. Investors have been clamoring for U.S. government action to combat the economic impact.

At the same time, new infections in Italy soared by more than 2,500 and virus-related deaths made their biggest single day jump, increasing by 250. In the three weeks since the country identified its first virus cluster, Italy has reached a total of 17,600 confirmed cases, with 1,266 deaths. The government has ordered an unprecedented lockdown, ordering businesses to close and restricting movement.

“Europe has now become the epicenter of the pandemic,” said World Health Organization Director-General Tedros Adhanom Ghebreyesus. “More cases are now being reported every day than were reported in China at the height of its epidemic.”

New infections also rose sharply in Spain, and the government put 60,000 people in four towns on a mandatory lockdown Friday that echoed Italy’s. In Madrid, which is struggling with nearly 2,000 infections, many in nursing homes, the government was pooling intensive care units and considering offers by hotel chains to transform rooms into sick wards.

Spanish Prime Minister Pedro Sánchez announced a two-week state of emergency beginning Saturday and pledged to “mobilize all resources,” including military, to contain the country’s sharp rise in coronavirus cases.

In just 24 hours, the numbers of confirmed cases spiked ominously in some places: France saw an additional 800 cases to reach more than 3,600 by Friday; Britain went from 590 to 798 and New York state jumped 30 percent, hitting 421. Cases topped 1,700 across the U.S. In Africa, where experts warn that containment is key because the continent’s already-strained health systems could likely lead to a higher mortality rate and deeper crisis that would have global impact, six new countries confirmed infections in the 24 hours.

In the U.S., hospitals were setting up circus-like triage tents, calling doctors out of retirement, guarding their supplies of face masks and making plans to cancel elective and non-emergency surgeries as they brace for an expected onslaught of coronavirus patients in the coming weeks.

The Trump administration has come under fierce criticism for the slow rollout of testing in the U.S., but Trump said “I don’t take responsibility at all” for the problem.

The public-private partnership that Trump announced will include drive-thru testing in some areas — something already being done in South Korea and Germany — and an online portal to screen those seeking to get tested.

In China, where new infections have tailed off, authorities mobilized to prevent a boomerang effect, quarantining new arrivals for 14 days.

The spread of the virus in Europe, North America and the Middle East has drawn contrasts with waning outbreaks in the hardest-hit nations in Asia. China, where the virus emerged late last year, still accounts for more than 60% of global infections but on Friday reported just eight new cases and seven deaths.

Chinese President Xi Jinping told the U.N. leader his nation was returning to normal and now wants to conduct joint research on drugs and vaccines and offer “as much assistance as it can” to countries in need. A Chinese medical crew arrived in Italy and surplus supplies were sent to Iran.

The Italian town of Codogno, which had all but shut down hours after recording Italy’s first locally spread coronavirus infection, showed that changing habits do make a difference. New infections have slowed drastically there compared to the rest of Italy, where draconian measures came far later.

“More than a sigh of relief, there was some concern over the risk that all of the sacrifices were in vain,” said Mayor Francesco Passerini, who like most in the town wears a mask.

The goal is to slow the virus’ spread to avoid overwhelming hospitals with those sickened by an illness that no one in the world has immunity to. Worldwide, more than 137,000 people have been infected and 5,000 have died, but half of those who had the virus have already recovered. Most patients have mild or moderate symptoms such as a fever or cold, but severe symptoms including pneumonia can occur, especially in the elderly and people with existing health problems.

European officials pushed back against Trump’s sharp restrictions on travel from Europe.

“Instead of tending to the problems of his country, and to a virus that knows no borders, he thinks that he can fight it like people that have a different citizenship than American,” said German Finance Minister Olaf Scholz.

New travel restrictions sprang up practically by the hour on Friday: Switzerland, Sri Lanka, Portugal, the Czech Republic — all started barring entry to Europeans considered at risk. Ukraine announced it would halt all passenger air traffic, Poland said anyone entering the country will be put under a 14-day quarantine, while the Czech Republic and Slovakia have stopped almost all movement in and out of their countries. The European Union urged member countries to put health screening procedures in place at their borders.

In Iran, which exceeds 10,000 cases and 400 deaths, Foreign Minister Mohammad Javad Zarif urged the Trump administration to immediately lift sanctions over the country’s nuclear program. He said they made it difficult to import medicine and medical equipment.

Canadian Prime Minister Justin Trudeau was isolating himself after his wife tested positive. The Australian home affairs minister was hospitalized after testing positive. He returned home on Sunday from Washington, D.C., where he met with U.S. Attorney-General William Barr, Trump’s daughter and Sen. Lindsey Graham, who has self-quarantined after also having contact with a Brazilian official who tested positive.

Pressed by reporters, Trump, who also met with that Brazilian official at his Mar-a-Lago resort, said he will “most likely” be tested for the virus “fairly soon,” reversing an earlier White House statement.