Washington (AP) — President Donald Trump is putting out the word that he is considering spending as much as $100 million of his own fortune on his reelection effort as campaign officials try to buck up key supporters and donors amid daunting polling numbers and other bad news.

Trump said Tuesday that he’s prepared to use his own money and spend “whatever it takes” to win a second term in the White House, but he sidestepped just how much of his own cash he’s willing to invest. 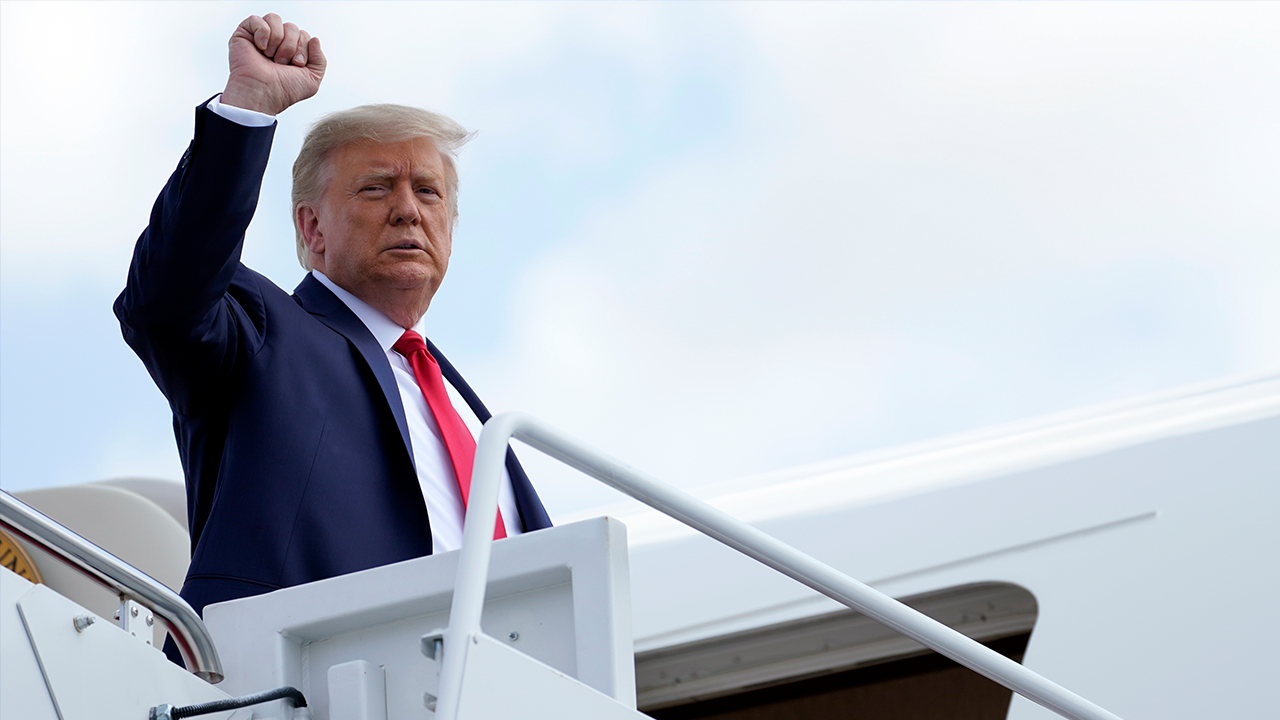 President Donald Trump boards Air Force One for a trip to Jupiter, Fla., to speak about the environment, Tuesday, Sept. 8, 2020, at Andrews Air Force Base, Md. He will also travel to a campaign rally in North Carolina. (AP Photo/Evan Vucci)

“If I have to, I would,” Trump said of spending his own money. Speaking to reporters before departing for the battleground states of Florida and North Carolina, he added, “We have much more money than we had last time going into the last two months. But if we needed any more, I’d put it up.”

Dan Eberhart, a prominent Republican donor, said that two senior campaign officials told him in recent days that Trump was considering a personal investment in the campaign of as much as $100 million.

Eberhart said the campaign is trying to create “a little excitement” among top donors and prominent supporters as polls have shown Trump consistently trailing Democratic presidential nominee Joe Biden nationally and in some battleground states. Trump also is grappling with the political fallout from the mounting number of coronavirus deaths and the pandemic’s economic toll.

Trump spent more than $60 million of his own money on his 2016 run for the White House. This time, he began raising campaign funds almost immediately after his inauguration and built an enormous war chest early on that advisers believed put him at a distinct advantage over the Democratic nominee.

Eberhart said he was skeptical that Trump will spend $100 million of his own money and questioned whether money was significantly hampering the president’s campaign. Bloomberg News was first to report that Trump was weighing the significant personal investment in the campaign.

Eberhart said that if Trump follows through with spending his own money it would put pressure on the GOP’s biggest financial backers to step up.

“When the president is thinking of writing a check of that size to his campaign, you have to imagine that top donors are feeling the pressure to kick in more than they already have,” Eberhart said.

Trump’s reelection effort, including the Republican National Committee, has spent more than $800 million so far, while Biden and the Democratic National Committee have spent about $414 million through July, according to campaign spending reports. The Trump campaign has not released its fundraising totals from August, a significant delay that raises questions coming on the heels of the Biden team announcing an eye-popping $364 million take for the month.

In the days following the last month’s Republican Nation Convention, Trump made the unusual move of pulling most of his advertising from TV, ceding the airwaves to Biden.

During August, Biden doubled what Trump spent on ads, dropping about $80 million in states that include battlegrounds such as Wisconsin, Florida, Pennsylvania and Michigan, according to data from the ad tracking firm Kantar/CMAG.

Democrats are hardly counting Trump out.

The president’s campaign has reserved $140 million for TV ads before the election, according to data compiled by the ad tracking firm Kantar/CMAG. And last week, a new super PAC — Preserve America — launched with plans to spend nearly $30 million on television and digital advertising in battleground states to bolster Trump.

Trump was forced to give up his signature big stadium rallies because of the coronavirus pandemic. But he’s used the spoils of incumbency to his advantage, calling frequent news conferences to lash out against Biden and make his case for a second term. During official White House events, he’s also made a habit of layering in digs at Biden and touting his successes — making his commentary about government business and campaigning indistinguishable.

Bill Stepien, Trump’s campaign manager, was pressed by reporters on a campaign conference call Tuesday about the possible cash shortfall experienced by the president’s team.

“If money was the only factor determining winners and losers in politics,” he said, “then Jeb Bush would have been the nominee in 2016 and we’d have a second President Clinton.”

Stepien acknowledged that he was “carefully managing the budget.” He echoed the president in saying that the Trump campaign, which was outspent in 2016, has more resources to use between now and Election Day than it did four years ago.

He also pointed to the campaign’s early expenditures as paying off, particularly on field staff in battleground states and said that Biden could not replicate that in the little time left until Election Day.

Stepien also said the team’s advertising would be “nimble,” and include a TV spree in early voting states as well an urban radio campaign in Minnesota, Wisconsin, Michigan, North Carolina, Georgia, and Florida that would contrast Trump’s record for Black voters with Biden’s, a move aimed just as much at suburban white listeners.

Trump also took to Twitter on Tuesday to play down concerns about having enough money to compete in the home stretch of the campaign, underscoring he has “much more” money on hand than he did at this point in the campaign in 2016.

Still, Trump added in his comments to reporters that he was prepared to spend his own cash to help his cause.

“Whatever it takes,” said Trump. “We have to win.”