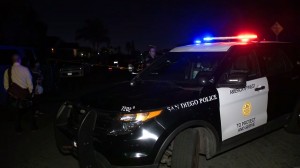 SAN DIEGO (KUSI) – A probationer was jailed on a raft of criminal charges early Wednesday after allegedly threatening a woman with a gun at a Birdland-area apartment building and then refusing to surrender when police arrived, prompting a nearly 10-hour standoff.

Matthew Scott Lee, 25, surrendered at the residential complex in the 2300 block of Cardinal Drive shortly after midnight, according to the San Diego Police Department.

Lee had been holed up in an apartment in the neighborhood just east of Tecolote Canyon since about 2:30 p.m. Tuesday, after allegedly pulling a handgun on a woman there, SDPD public affairs Lt. Adam Sharki said.

“Officers learned that in addition to threatening the woman, he was also manufacturing unserialized ghost guns inside his apartment,” Sharki said.

After the stalemate had gone on for more than an hour, police commanders called in a SWAT team to take up positions around the complex. Officers also closed several blocks of the street fronting the apartment building pending resolution of the situation.

Administrators at nearby Fletcher Elementary School put the campus on lockdown and transported students to Chesterton Elementary School on Linda Vista Road to be picked up by their parents, according to San Diego Unified School District officials.

After finally giving himself up to police and being interrogated by detectives, Lee was booked into San Diego Central Jail on suspicion of 19 counts, including assault with a deadly weapon, issuing criminal threats, illegally possessing a gun, violating conditions of his probation and various charges relating to the illegal manufacture of firearms.

He was being held on $468,000 bail pending arraignment, scheduled for Friday afternoon.

We are still on scene at 2600 Cardinal Rd. We are keeping the roads closed due to an armed suspect. Our number one priority is to keep the community safe. pic.twitter.com/OBCMMhLukV