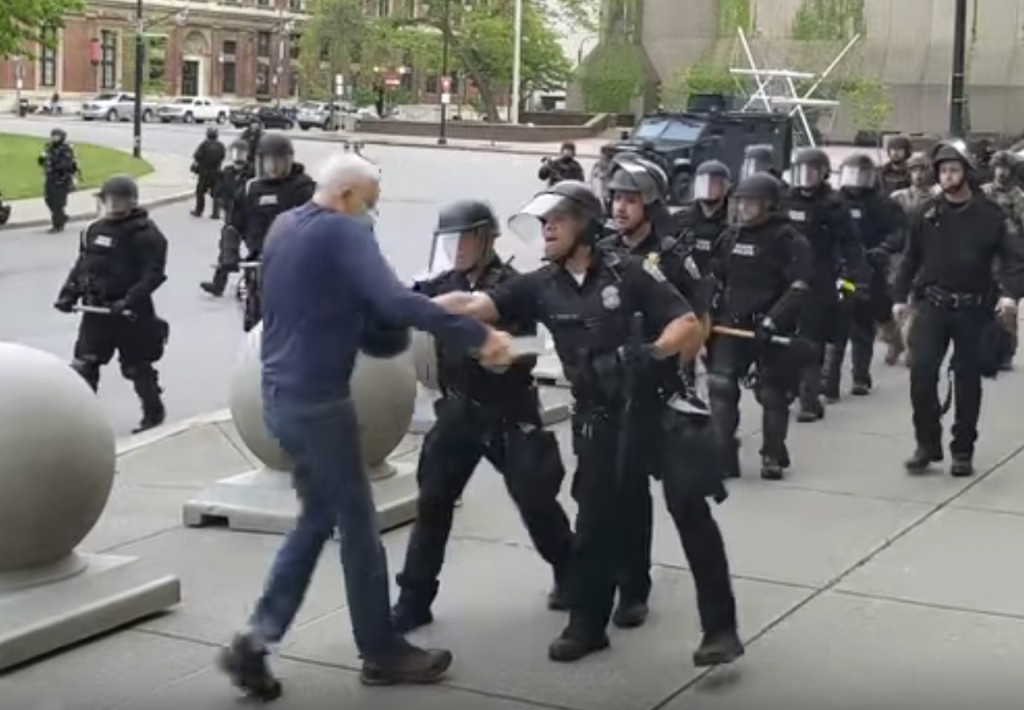 In this image from video provided by WBFO, a Buffalo police officer appears to shove a man who walked up to police Thursday, June 4, 2020, in Buffalo, N.Y. Video from WBFO shows the man appearing to hit his head on the pavement, with blood leaking out as officers walk past to clear Niagara Square. Buffalo police initially said in a statement that a person “was injured when he tripped & fell,” WIVB-TV reported, but Capt. Jeff Rinaldo later told the TV station that an internal affairs investigation was opened. Police Commissioner Byron Lockwood suspended two officers late Thursday, the mayor’s statement said. (Mike Desmond/WBFO via AP)

BUFFALO, N.Y. (AP) — Two Buffalo police officers were charged with assault Saturday, prosecutors said, after a video showed them shoving a 75-year-old protester in recent demonstrations over the death of George Floyd in Minnesota.

Robert McCabe and Aaron Torgalski, who surrendered Saturday morning, pleaded not guilty to second-degree assault. They were released without bail.

The officers had been suspended without pay Friday after a TV crew captured the confrontation the night before near the end of protests.

The footage shows a man identified as Martin Gugino approaching a line of helmeted officers holding batons as they clear demonstrators from Niagara Square around the time of an 8 p.m. curfew.

Two officers push Gugino backward, and he hits his head on the pavement. Blood spills as officers walk past. One officer leans down to check on the injured man before another officer urges the colleague to keep walking.

The video of the encounter sparked outrage online as demonstrators take to cities across the country to protest Floyd’s death.

“I think there was criminal liability from what I saw on the video,” Gov. Andrew Cuomo said at a briefing Saturday. “I think what the mayor did and the district attorney did was right, and I applaud them for acting as quickly as they did.”

“What we saw was horrendous and disgusting, and I believe, illegal,” he added.

But dozens of Buffalo police officers who were angered over their fellow officers’ suspensions stepped down from the department’s crowd control unit Friday. The resigning officers did not leave their jobs altogether.

The Latest: Texas hits new high for COVID-19 deaths, with 98