Prosecutors: No charges for officer who fatally shot Ashli Babbitt in US Capitol

WASHINGTON (AP) — Federal prosecutors won’t charge a police officer who shot and killed a woman as she climbed through the broken part of a door during the insurrection at the U.S. Capitol on Jan. 6.

Authorities had considered for months whether criminal charges were appropriate for the Capitol Police officer who fatally shot Ashli Babbitt, a 35-year-old Air Force veteran from San Diego. 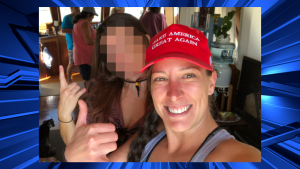 The Justice Department’s decision officially closes out the investigation.

Prosecutors said they had reviewed video of the incident, along with statements from the officer involved and other officers and witnesses, examined physical evidence from the scene and reviewed the autopsy results.

According to the Department of Justice, the investigation looked into whether the officer used force that was constitutionally unreasonable.

“Specifically, the investigation revealed no evidence to establish that, at the time the officer fired a single shot at Ms. Babbitt, the officer did not reasonably believe that it was necessary to do so in self-defense or in defense of the Members of Congress and others evacuating the House Chamber,” according to the DOJ statement. “Acknowledging the tragic loss of life and offering condolences to Ms. Babbitt’s family, the U.S. Attorney’s Office and U.S. Department of Justice have therefore closed the investigation into this matter.”

The DOJ statement also said, “The investigation determined that, on January 6, 2021, Ms. Babbitt joined a crowd of people that gathered on the U.S. Capitol grounds to protest the results of the 2020 presidential election. Inside the Capitol building, a Joint Session of Congress, convened to certify the results of the Electoral College vote, was underway. Members of the crowd outside the building, which was closed to the public during the Joint Session, eventually forced their way into the Capitol building and past U.S. Capitol Police (USCP) officers attempting to maintain order.

The Joint Session was stopped, and the USCP began evacuating members of Congress. The investigation further determined that Ms. Babbitt was among a mob of people that entered the Capitol building and gained access to a hallway outside “Speaker’s Lobby,” which leads to the Chamber of the U.S. House of Representatives. At the time, the USCP was evacuating Members from the Chamber, which the mob was trying to enter from multiple doorways. USCP officers used furniture to barricade a set of glass doors separating the hallway and Speaker’s Lobby to try and stop the mob from entering the Speaker’s Lobby and the Chamber, and three officers positioned themselves between the doors and the mob.

Members of the mob attempted to break through the doors by striking them and breaking the glass with their hands, flagpoles, helmets, and other objects. Eventually, the three USCP officers positioned outside the doors were forced to evacuate. As members of the mob continued to strike the glass doors, Ms. Babbitt attempted to climb through one of the doors where glass was broken out. An officer inside the Speaker’s Lobby fired one round from his service pistol, striking Ms. Babbitt in the left shoulder, causing her to fall back from the doorway and onto the floor. A USCP emergency response team, which had begun making its way into the hallway to try and subdue the mob, administered aid to Ms. Babbitt, who was transported to Washington Hospital Center, where she succumbed to her injuries.”

Babbitt was one of five people who died during the insurrection, including a police officer.

The day before chaos descended on the Capitol, Babbitt retweeted a video from the page Right Side Broadcasting Network of a rally in Freedom Plaza supporting former President Donald Trump, which made mention of “big protests” happening the next day.

Her final Twitter post, made Jan. 6, said, “Nothing will stop us … they can try and try and try but the storm is here and it is descending upon DC in less than 24 hours … dark to light!”