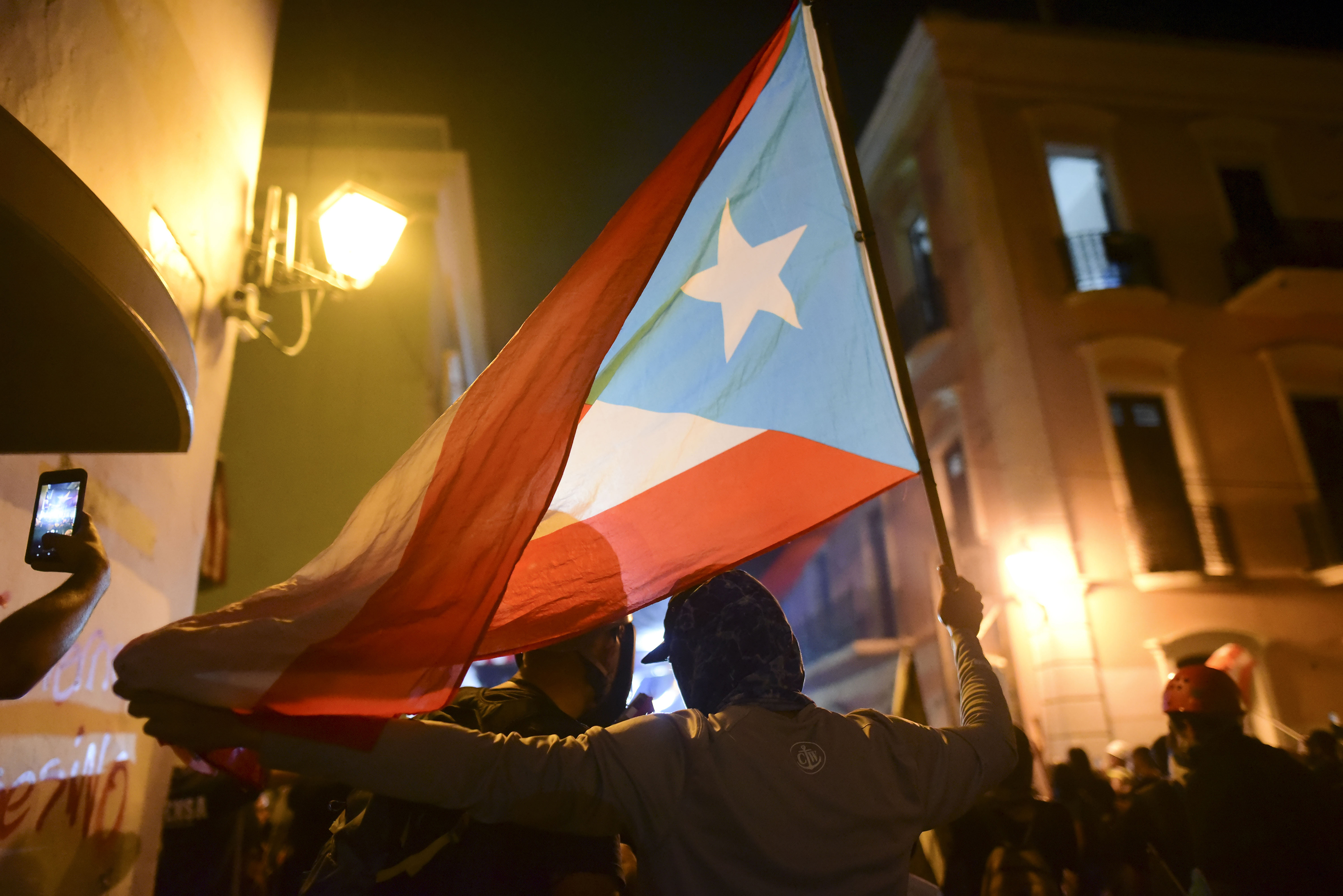 Protesters hold a Puerto Rican flag during a protest in San Juan, Puerto Rico, Thursday, Jan. 23, 2020. Hundreds of people joined a protest Thursday organized by Puerto Rican singer Rene Perez of Calle 13 fame in a demonstration reminiscent of those that ousted the island’s former governor last year. Anger is growing over emergency aid that until recently sat unused in a warehouse amid ongoing earthquakes. (AP Photo/Carlos Giusti)

SAN JUAN, Puerto Rico (AP) — Hundreds of people joined a protest Thursday organized by Puerto Rican singer René Pérez of Calle 13 fame in a demonstration reminiscent of those that ousted the island’s former governor last year. Anger is growing over emergency aid that until recently sat unused in a warehouse amid ongoing earthquakes.

Protesters gathered under the heavy rain at the governor’s mansion as they waved flags and banged on pots, demanding the ouster of Gov. Wanda Vázquez.

“This is not the end! It’s just the beginning!” one of the protest organizers yelled to a cheering crowd, which had marched to the mansion from the Capitol building. By late Thursday, police fired tear gas at a small group of protesters and ordered them to leave the area. A handful of protesters responded by setting a small barricade on fire and breaking nearby windows.

The newest protest unleashed debate about whether Puerto Ricans should try to oust Vázquez as the U.S. territory struggles to recover from a recent 6.4 magnitude earthquake that killed one person and damaged hundreds of homes in the island’s southern region. Officials are still awaiting millions of dollars in federal funds for Hurricane Maria, a Category 4 storm that hit in September 2017.

“We’ve had enough,” said 82-year-old Iris Guardiola as she waved a tiny Puerto Rican flag. “The people are tired of the abuse… of the lack of humanity. I am here helping those who cannot be here.”

One former protest leader, Rey Charlie, who jumped to fame after leading hundreds of motorcycle riders in a demonstration last summer, said he will not participate in the most recent one.

“A massive demonstration like the one last year would cause great damage, damage that I think would be irreparable,” he said. “You are holding up the economy, you are holding up aid supplies to victims in the southern region, you are paralyzing the country…You have to think of the consequences.”

Charlie and other critics of the recent protests argue that the most effective strategy is to vote in the upcoming general elections in November, in which Vázquez is seeking a second term as governor. But first, she will face Pedro Pierluisi, a veteran politician who served as the island’s representative in Congress, in the primary of their pro-statehood party. Pierluisi was sworn in briefly as governor last year before the island’s Supreme Court ruled that Vázquez was constitutionally next in line after former Gov. Ricardo Rosselló resigned following massive demonstrations.

Vázquez has only briefly addressed the recent protests, warning of people who want to talk about “negative issues.”

“We cannot allow groups with other interests to divert our attention,” she told reporters on Wednesday. “We’re in a moment of helping people in the south, not of creating controversy.”

Vázquez came under fire on Saturday after an online blogger posted a live feed of a warehouse in the southern coastal city of Ponce filled with water, cots, baby food and other supplies dating from Hurricane Maria. A group of people broke into the warehouse and began distributing supplies to those affected by the recent 6.4 magnitude quake that prompted U.S. President Donald Trump to approve a major disaster declaration for more than a dozen municipalities in the island’s southern region. More than 4,500 people remain in shelters.

The governor fired the director of Puerto Rico’s emergency management agency shortly after the incident, as well as the secretaries of the department of housing and family, as she blamed them in part for not distributing the aid.

The Puerto Rican singer, Pérez, said people should not wait until the general elections to express their discontent.

Concerns over alleged corruption and mismanagement have delayed federal funds to Puerto Rico and led U.S. officials to impose new restrictions as the island struggles to emerge from a 13-year recession.

Carmen Velázquez, a 71-year-old retiree, said she doubts the protests will accomplish what they did last year, “but I can’t remain sitting at home. The lies and the cheating are still going on.”

She dismissed concerns that the protest would create more uncertainty in Puerto Rico.