The Republican Elder says he filed all the necessary paperwork to qualify to run in the Sept. 14 election that could remove Democratic Gov. Gavin Newsom from office. 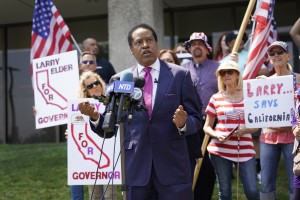 FILE — In this July 13, 2021 file photo radio talk show host Larry Elder speaks to supporters during a campaign stop in Norwalk, Calif. Elder has announced his candidacy for governor in the Sept. 14 recall election but the California Secretary of State’s office has rejected his candidacy saying Elder, a Republican, filed incomplete tax returns that are required to run. Elder is challenging the decision. (AP Photo/Marcio Jose Sanchez, File)

But the secretary of state’s office did not include Elder among 41 candidates issued on a preliminary list last weekend, saying he filed incomplete information on income tax returns that are required to run.

In a statement Monday night, Elder’s campaign says he filed a suit in Superior Court in Sacramento challenging the decision.