Religious exemptions on the rise amid vaccine mandates

Religious objections were once used only sparingly around the country to get exempted from various required vaccines. But they are becoming a much more widely used loophole against the COVID-19 shot. About 3,000 Los Angeles Police Department employees are citing religious objections to try to get out of the required COVID-19 vaccination. In Washington state, hundreds of state workers are seeking similar exemptions. And an Arkansas hospital has been swamped with so many such requests from employees that it is apparently calling their bluff. 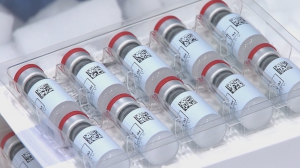 However, it remains uncertain whether these religious exemptions will be approved. In December, the Department of Labor issued major changes to religious exemption, one of which was adding definitions to key terms including “religion” and “sincere.” This could add a hurdle to those who want to opt out of the vaccine due to personal choice.

This comes after President Joe Biden announced a federal vaccination mandate- his boldest move to combat the ongoing pandemic yet. The mandate has been a point of contention among party lines, with prominent GOP members blasting the move as “un-American.”

President Biden has made small business an enemy of his administration. Forcing main street to vax or pay a fine will not only crush an economy he's put on life support—it's flat-out un-American.

To Joe Biden, force is more important than freedom. Americans won't stand for it.

Meantime, the sweeping mandate has caused some confusion. Following Biden’s announcement on the 9th, Unemployment Attorney Annie Ellis spoke with KUSI’s Logan Byrnes on Good Evening San Diego to discuss the logistics of the mandate. She says the mechanisms and practicality of how to implement the order were not thought through.