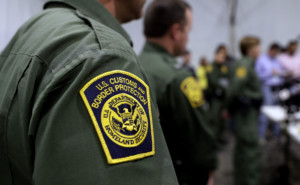 Border Patrol agents hold a news conference prior to a media tour of a new U.S. Customs and Border Protection temporary facility near the Donna International Bridge, Thursday, May 2, 2019, in Donna, Texas. Officials say the site will primarily be used as a temporary site for processing and care of unaccompanied migrant children and families and will increase the Border Patrol’s capacity to process migrant families. (AP Photo/Eric Gay)

SAN DIEGO (KUSI) – A retired Los Angeles police officer filed a claim Wednesday against the U.S. Department of Homeland Security and Customs and Border Protection, alleging she was sexually assaulted and unlawfully arrested by border agents who arrested her at the Otay Mesa Port of Entry last year.

Janine Bouey alleges that on June 16, 2020, an officer pulled her out of the pedestrian lanes while she was trying to re-enter the United States from Tijuana.

Despite having her passport and other identification at the ready and declaring multiple times that she was a U.S. citizen, Bouey alleges she was repeatedly asked about her citizenship, then later arrested, fondled by a female CBP officer and forced to disrobe in front of officers as part of an apparent inspection.

The claim, which is a precursor to a lawsuit, seeks $3 million in damages for Bouey’s “severe emotional distress and medical bills caused by the actions of the CBP officers.” Bouey’s attorneys are alleging sexual assault, battery, false arrest and false imprisonment, among other causes of action.

DHS did not respond to a request for comment on the allegations, and a CBP spokeswoman said that per policy, U.S. Customs and Border Protection does not comment on matters under litigation.

Bouey alleges the officer who initially pulled her out of line did so after asking for her home address in a “flirtatious and pushy” tone.

She alleges she was then taken into the main building of the Otay Mesa Port of Entry and fondled by the unidentified female officer on two separate occasions, then handcuffed and shackled to a bench. She claims she asked to call an attorney, but was not allowed to do so, and that the officers ignored her requests to look up her information in order to verify her citizenship.

Later, she was taken to a different room where she was instructed to remove her clothes, then bend over and squat while one of the officers shined a flashlight into her vaginal area, according to her claim.

She says she was again shackled to a bench, but eventually another officer said she was free to go. Bouey says she asked that officer how he would feel if his mother had undergone similar treatment, to which he allegedly responded, “these things happen.”