BERLIN (AP) — The U.S. Embassy in Berlin unveiled a statue of Ronald Reagan on Friday at a site overlooking the location of the former president’s iconic speech imploring the Soviet Union to remove the Berlin Wall.

Secretary of State Mike Pompeo called the inauguration of the work a “monumental moment” before helping remove the cover from the larger-than-life statue on the Embassy’s terrace, at eye-level with the top of the landmark Brandenburg Gate.

Saturday marks the 30th anniversary of the fall of the Berlin Wall, and Pompeo was winding up a two-day trip to multiple cities and towns for commemorations.

The gate, which was just on the East German side of the Wall, was the backdrop for Reagan’s 1987 speech in which he challenged Soviet leader Mikhail Gorbachev to go further with the reforms he was instituting. 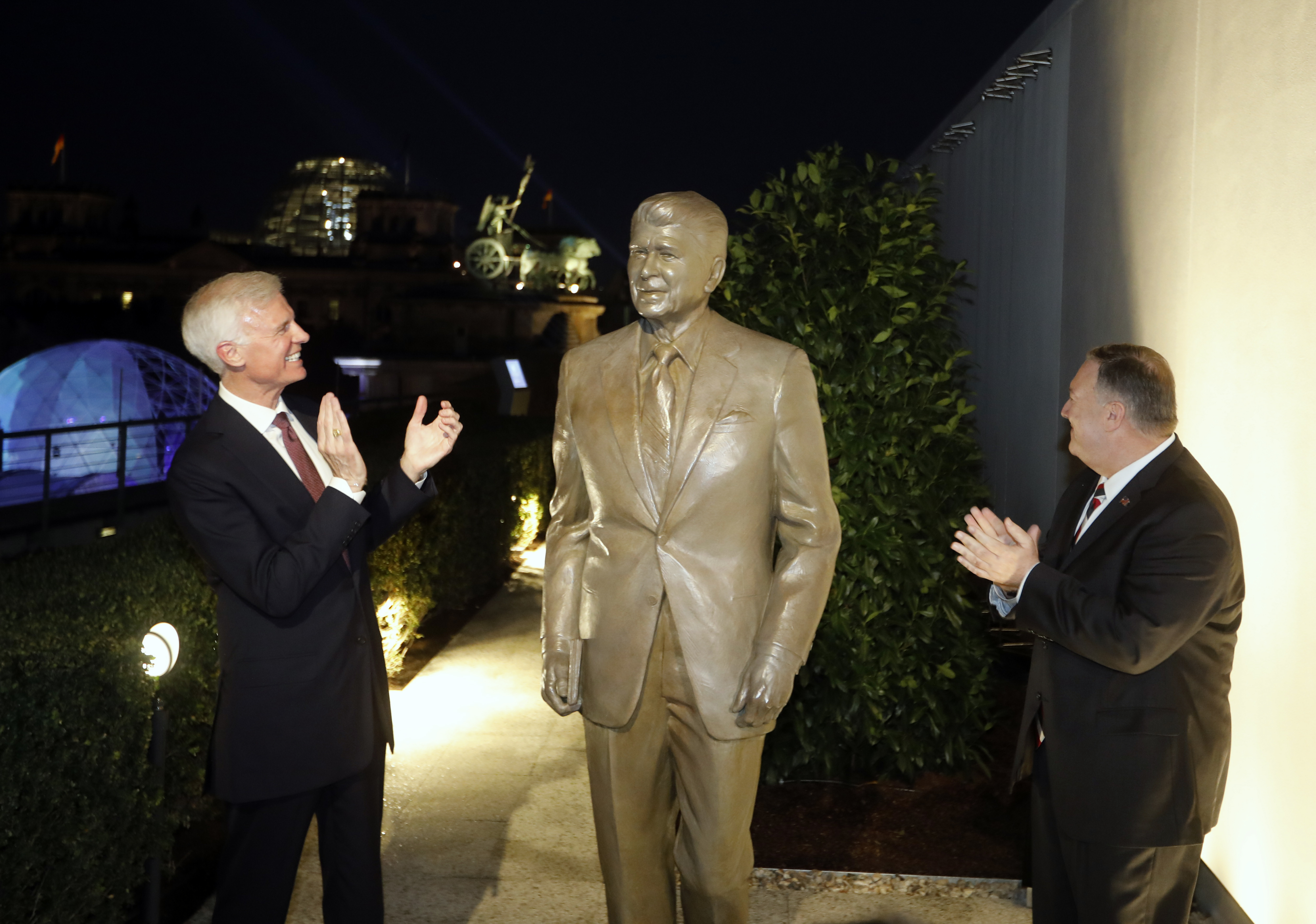 Pompeo praised Reagan for his bold defense of freedom, telling a gathering of politicians, diplomats, donors and others that the former president “courageously denounced the greatest threat to that freedom, the Soviet Empire, the Evil Empire.”

German Foreign Minister Heiko Maas drew domestic and international flak recently for failing to mention Reagan — or any other American — in an op-ed published in 26 European newspapers focused on the fall of the Berlin Wall and collapse of communism.

“Dear Minister Maas, on behalf of the late President Reagan, whom you don’t mention, and the millions of American Soldiers who served in West Germany along with your other NATO Allies, you’re welcome,” former U.S. Army Europe commander, retired Lt. Gen. Ben Hodges, wrote on Twitter.

Maas sought to defuse the criticism Thursday at an event with Pompeo, saying “we owe you our freedom and unity to a decisive degree,” while singling out contributions from Reagan and former President George H.W. Bush.

U.S. Ambassador Richard Grenell earlier this year opened a multimedia exhibit on the same terrace focusing on Reagan’s Brandenburg Gate speech, and said the statue was a tribute to a president whose “willingness to defend people seeking greater freedom around the world remains an inspiration today to Germans, Americans and every human being.”

“As a Californian, I’m personally proud to have our former governor and president of the United States standing atop the Embassy, reminding visitors of America’s commitment to democracy and freedom,” he told The Associated Press.

Several American presidents visited Berlin during the Cold War to express their solidarity with those in the democratic West of the city that was divided by the Wall from Aug. 13, 1961, to Nov. 9, 1989.

He told the thousands gathered: “All free men, wherever they may live, are citizens of Berlin, and, therefore, as a free man, I take pride in the words ‘Ich bin ein Berliner.'”

Today a plaque marks that location and the square has been renamed “John F. Kennedy Platz.”

The site of the Reagan speech is marked with an information sign. The lawmaker who heads the state committee in charge of memorials in Berlin, Sabine Bangert, rejected the suggestion that Reagan had somehow been given short shrift.

“The contributions of U.S. Presidents John F. Kennedy and Ronald Reagan to Berlin as well as to German unity are well known in Berlin,” she told the AP.

“Kennedy’s … ‘Ich bin ein Berliner’ speech and Ronald Reagan’s memorable Berlin sentence from 1987, ‘Mr. Gorbachev tear down this wall,’ as well as Barack Obama’s speech at the Brandenburg Gate in 2016, are in all of our memories.”

California may release 10% of inmates in pandemic response