Rosenstein to meet Trump Thursday as job hangs in balance

WASHINGTON (AP) — President Donald Trump will meet later this week with Deputy Attorney General Rod Rosenstein, the White House said Monday amid indications that Rosenstein was about to lose his job.

The meeting will be Thursday, said White House press secretary Sarah Huckabee Sanders. That’s the same day as an extraordinary Senate hearing that is to feature Supreme Court nominee Brett Kavanaugh and a woman who has accused him of sexually assaulting her when they were in high school.

Any termination or resignation would have immediate implications for special counsel Robert Mueller’s investigation of possible collaboration between Russia and the Trump campaign before the 2016 election. Rosenstein appointed Mueller and oversees his investigation. 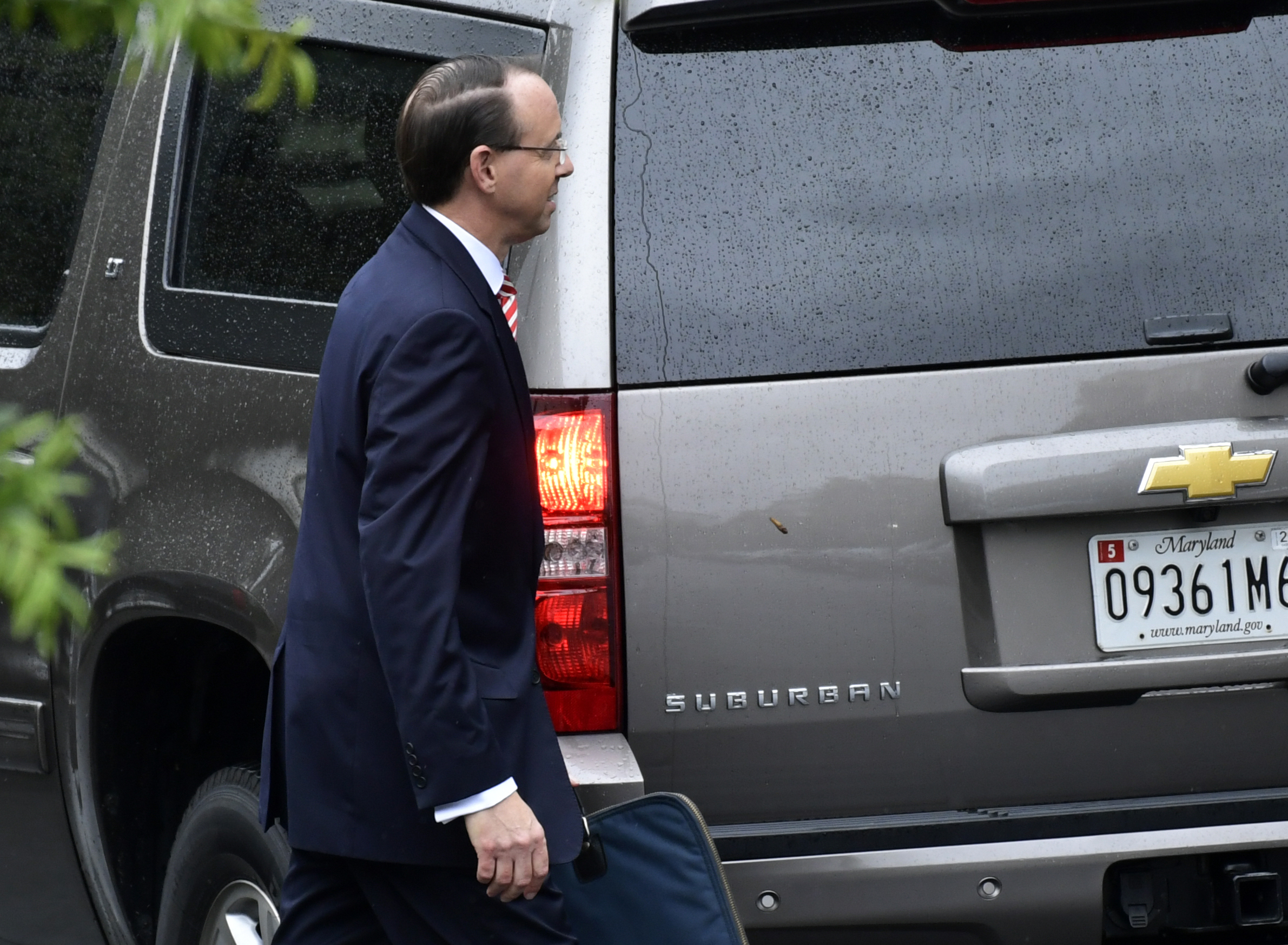 Rosenstein and Trump, who is in New York for a U.N. meeting, had an extended conversation to discuss recent news stories about negative comments Rosenstein is reported to have made last year about the president, Sanders said. The deputy attorney general was reported as having discussed possibly secretly recording the president and invoking the Constitution to have the Cabinet remove him from office.

Rosenstein expected to be fired Monday as he headed to the White House for a previously scheduled Cabinet meeting in place of Attorney General Jeff Sessions, according to a person familiar with the situation. But he left with no action taken, and the White House statement suggested he may be in his job for at least several more days.

“At the request of Deputy Attorney General Rod Rosenstein, he and President Trump had an extended conversation to discuss the recent news stories,” Sanders said in a statement. “Because the President is at the United Nations General Assembly and has a full schedule with leaders from around the world, they will meet on Thursday when the President returns to Washington, D.C.”

Rosenstein called White House Counsel Don McGahn over the weekend to say he was considering resigning, according to one person familiar with the conversation. McGahn told Rosenstein they should discuss the issue Monday, said the person who spoke on condition of anonymity to discuss the private conversation.

Solicitor General Noel Francisco, the highest-ranking Senate confirmed official below Rosenstein in the Justice Department, would take control of the Mueller investigation. A spokesman for Mueller declined to comment.

The reports about Rosenstein add to the turmoil roiling the administration, just six weeks before midterm elections with control of Congress at stake. In addition to dealing with the Mueller investigation, the White House is also struggling to win confirmation of its Supreme Court nominee, Brett Kavanaugh, in the wake of sexual misconduct allegations.

Trump had previously floated the idea firing Rosenstein in April after FBI raids of the office and home of the president’s longtime personal attorney, Michael Cohen, who has since pleaded guilty to several felonies and taken part in interviews with Mueller’s team.

But the latest move comes after a New York Times report of Rosenstein comments in May 2017. That report and an unsigned opinion piece by a senior official in the Republican administration played to some of the president’s concerns about a secret “Deep State” trying to undermine him from within the government.

The administration official, whom Trump has called for a federal investigation to unmask, wrote that there was a group of officials working to safeguard the country from the president’s most dangerous impulses. And Trump’s behavior had prompted “whispers” in the Cabinet of invoking the 25th Amendment, a move that was backed away from due to concerns it would “precipitate a constitutional crisis,” the writer said.

In Rosenstein’s case, he has said that the Times report was inaccurate and said it was based on “biased” anonymous sources “advancing their own personal agenda.”

“Based on my personal dealings with the president, there is no basis to invoke the 25th Amendment,” Rosenstein said.

The Justice Department also released a statement from a person who said Rosenstein’s recording comment was meant sarcastically.

If Rosenstein were to resign instead of being fired, it would allow the White House to use the Vacancies Reform Act to fill his role. The federal provision allows the president to circumvent the existing agency line of succession in most instances. But experts doubt it can be applied when the president creates the vacancy, by firing the officeholder.

As of Sunday, Trump said he had not decided what to do about Rosenstein. He angrily asked confidants, both inside and outside the White House, how to respond. He received mixed messages. Some urged him to fire Rosenstein. Others suggested restraint while seeing if the report was incorrect or if it was planted by some adversary.

Congressional Republicans, Democrats and some Trump aides have warned for months that the president shouldn’t fire Rosenstein, saying such a move could lead to impeachment proceedings if the Democrats retake the House in the upcoming midterms.

Former FBI Deputy Director Andrew McCabe, whose private memos document comments made by Rosenstein, said Monday he he was concerned that a Rosenstein departure would put the investigation at risk.

“There is nothing more important to the integrity of law enforcement and the rule of law than protecting the investigation of special counsel Mueller,” McCabe said in a statement. “I sacrificed personally and professionally to help put the investigation on a proper course and subsequently made every effort to protect it.”

Rosenstein appointed Mueller in May of last year after Sessions, who ordinarily would have overseen the investigation, recused himself because of his close involvement in the Trump campaign.

Those developments came one week after Rosenstein laid the groundwork for the firing of Comey by writing a memo that criticized Comey’s handling of the FBI investigation into Hillary Clinton’s email server. The White House initially held up that memo as justification for Comey’s firing, though Trump himself has said he was thinking about “this Russia thing” when he made his move.