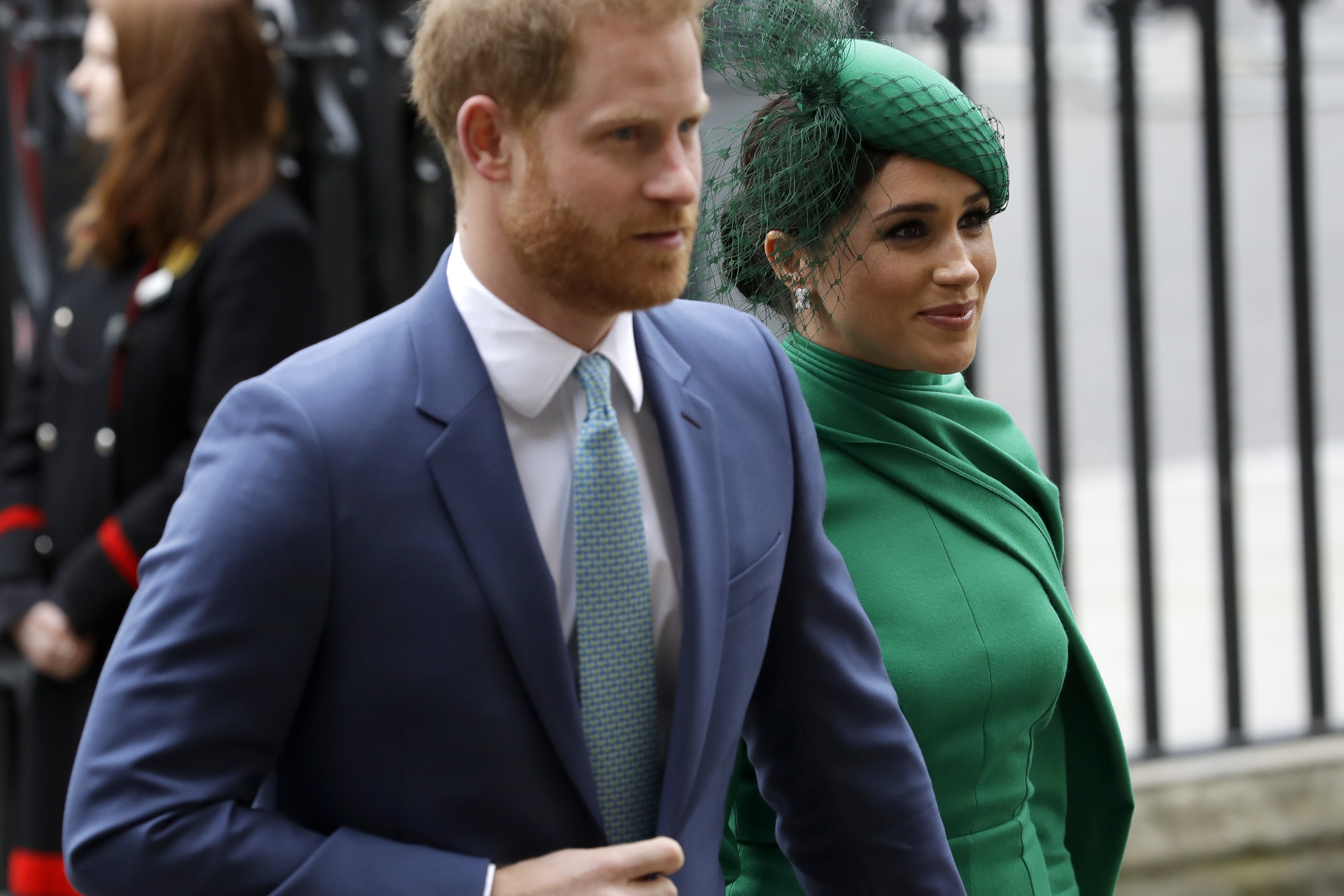 Britain’s Harry and Meghan the Duke and Duchess of Sussex arrive to attend the annual Commonwealth Day service at Westminster Abbey in London, Monday, March 9, 2020. The annual service, organised by the Royal Commonwealth Society, is the largest annual inter-faith gathering in the United Kingdom. (AP Photo/Kirsty Wigglesworth)

The royal schism that the couple triggered in January by announcing that they would step down from official duties, give up public funding, seek financial independence and swap the U.K. for North America becomes official on March 31.

The move has been made more complicated and poignant by the global coronavirus pandemic, which finds the couple and their 10-month-old son Archie in California, far from Harry’s father Prince Charles — who is recovering after testing positive for COVID-19 — and Harry’s 93-year-old grandmother, Queen Elizabeth II.

“As we can all feel, the world at this moment seems extraordinarily fragile,” the couple said in a final post Monday on their now-mothballed SussexRoyal Instagram account.

“What’s most important right now is the health and well-being of everyone across the globe and finding solutions for the many issues that have presented themselves as a result of this pandemic,” they added. “As we all find the part we are to play in this global shift and changing of habits, we are focusing this new chapter to understand how we can best contribute.”

It is less than two years since ex-soldier Harry, who is sixth in line to the British throne, married American actress Meghan Markle at Windsor Castle in a lavish ceremony watched by millions around the world.

Soon the couple began to bristle at intense scrutiny by the British media — which they said tipped into harassment. They decided to break free, in what Harry called a “leap of faith” as he sought a more peaceful life, without the journalists who have filmed, photographed and written about him since the day he was born.

Harry has long had an uncomfortable relationship with the media, which he blames for the death of his mother, Princess Diana. She died in a car crash in Paris in 1997 while being pursued by paparazzi.

Harry’s unhappiness increased after he began dating Markle, then the star of TV legal drama “Suits.” In 2016 he accused the media of harassing his then-girlfriend, and criticized “racial undertones” in some coverage of the biracial Markle.

It’s clear that Meghan’s upbeat Californian style — embodied in the glossy images and life-affirming messages of the couple’s Instagram account — rankled with sections of Britain’s tabloid press, which is both insatiable for royal content and fiercely judgmental of the family members.

The couple — who are keeping their titles, Duke and Duchess of Sussex, but will no longer be called Their Royal Highnesses — had hoped to keep using the Sussex Royal brand in their new life. But last month they announced they wouldn’t seek to trademark the term because of U.K. rules governing use of the word “royal.”

The couple plans to launch a non-profit organization for their charitable activities in areas including youth empowerment, mental health, conservation, gender equality and education. Harry will also continue to oversee the Invictus Games, the Olympics-style competition he founded for wounded troops.

Meghan has been announced as the narrator of “Elephant,” a Disney nature documentary.

But for now, the couple’s office said they want the world to focus “on the global response to COVID-19.”

“The Duke and Duchess of Sussex will spend the next few months focusing on their family and continuing to do what they can, safely and privately, to support and work with their pre-existing charitable commitments while developing their future non-profit organisation,” the couple’s office said in a statement.

The newly independent Harry and Meghan will also need to earn money to help pay for a multi-million dollar security bill.

As senior royals, they have had bodyguards funded by British taxpayers. Since late last year, Harry and Meghan have since been based on Canada’s Vancouver Island, where security was provided by the Royal Canadian Mounted Police. Canadian authorities warned last month that would end once the couple ceased to be working royals.

The duke and duchess recently moved to the Los Angeles area, where Meghan grew up and where her mother still lives. The news led President Donald Trump to tweet on Sunday: “the U.S. will not pay for their security protection. They must pay!”

Harry and Meghan’s office said “security costs are being personally covered by the couple.”

Some royal historians warned that Harry and Meghan could struggle to find a fulfilling role. Comparisons have been drawn to King Edward VIII, who abdicated in 1936 to marry divorced American Wallis Simpson. The couple lived the rest of their lives in luxurious but lonely self-imposed exile from Britain.

Royal historian Penny Junor said U.K.-based royals were helping boost the nation’s morale during the coronavirus pandemic. The queen has issued a message to the nation, while Harry’s brother Prince William and his children joined in a public round of applause for health care workers.

“All of this is absolutely what the family is about, and those members of the royal family that are on a limb now are pretty irrelevant,” Junor said.