SAN DIEGO (KUSI) – A young Navy sailor who was accused of setting fire to the USS Bonhomme Richard was acquitted Friday by a military judge of charges stemming from the July 2020 blaze that burned for several days while the ship was docked at Naval Base San Diego.

Seaman Recruit Ryan Sawyer Mays, 21, had been charged with arson and willful hazarding of a vessel, but he denied any involvement in the fire. The military judge, Capt. Derek Butler, delivered his verdict Friday, one day after hearing closing arguments in May’s court-martial.

Prosecutors alleged that Mays set the blaze because he was disgruntled with the Navy after dropping out of the SEAL training program. But defense attorneys said there was another, more likely arsonist, although they also contended that the prosecution had not proven that the fire was arson at all.

Capt. Jay Jones, for the prosecution, argued Mays joined the Navy “for a very specific reason” and when that didn’t materialize, he found himself in the Bonhomme Richard’s Deck Department, which Jones described as “about as far away as you’re ever going to be from the SEALs.”

Prosecutors alleged that Mays was spotted by another Deck Department sailor, Petty Officer Kenji Velasco, who said he saw Mays walk toward the ship’s Lower Vehicle Storage Area — where investigators say the fire originated — just prior to the blaze breaking out. Velasco alleged Mays was carrying a bucket while walking toward the “Lower V” and said “I love Deck” in a sarcastic tone. 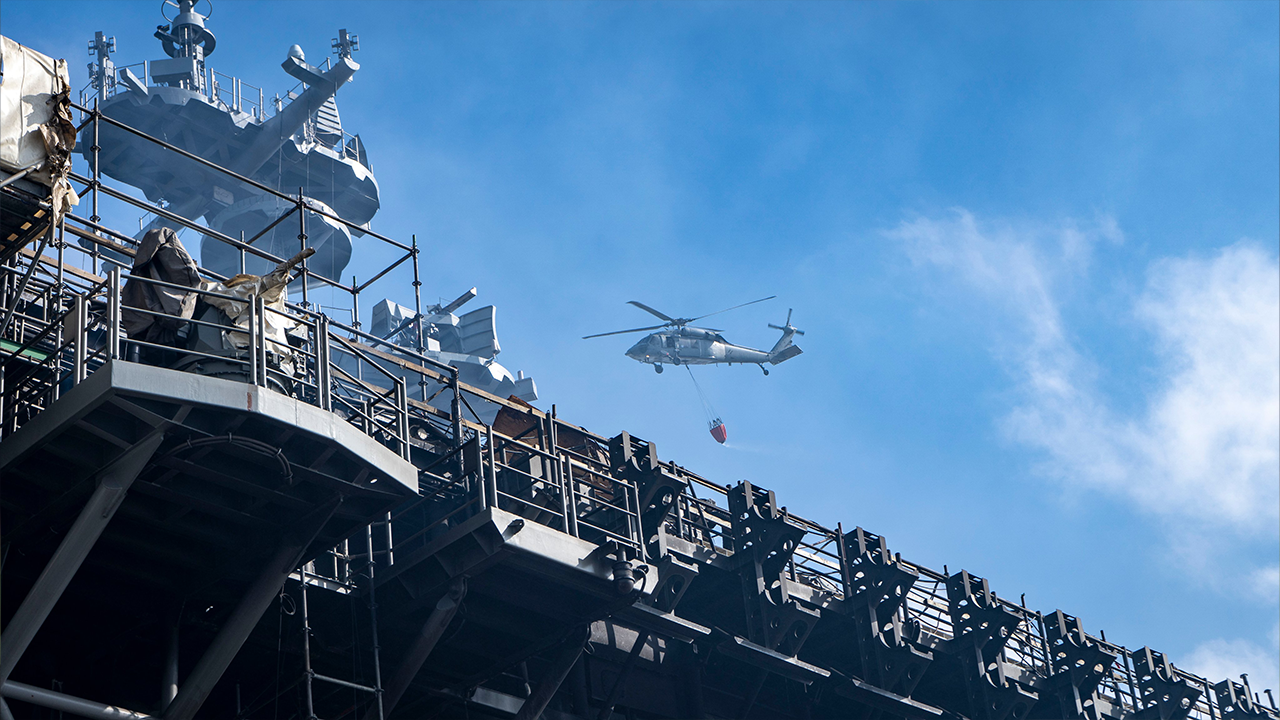 SAN DIEGO, UNITED STATES- In the photos taken on July 14, 2020, firefighters continue for the third consecutive day trying to smother the flames of the fire on the ship “USS Bonhomme Richard” operated by the Naval Base in San Diego, United States.

Lt. Cmdr. Jordi Torres, one of Mays’ defense attorneys, said Velasco’s statements were the only thing the prosecution had tying Mays to the fire.

Torres said no other sailors saw Mays near the Lower V and that Velasco did not initially say he saw anyone either. The attorney said that only after rumors surfaced that Velasco may have set the fire did he tell investigators about the interaction with another sailor, though he initially said he didn’t recognize who it was. He identified Mays as that sailor after an NCIS investigator asked him to “speculate,” Torres said.

Prosecutors alleged Mays set the fire by touching an open flame to combustible tri-walls. The prosecutor said the cardboard tri-walls were doused in an accelerant such as paint thinner, which Jones said was a chemical that Deck Department sailors would have ready access to.

Throughout the trial, defense attorneys pointed to other potential, inadvertent sources of ignition, such as lithium ion batteries and forklifts that may have sparked in the Lower V, or cigarettes and other smoking materials.

Torres said investigators had not properly ruled out any of those potential fire sources, which Jones denied, stating that significant testing had been undertaken to eliminate each alternative theory.

Once Mays had been pegged as the arsonist, Torres said investigators examined each piece of evidence to fit their preconceived beliefs.

“No one can reasonably say how this fire started,” Torres said in his closing argument. “But the evidence at this court-martial shows that this sailor didn’t do it.”

If it was arson, the defense alleged the Navy failed to investigate another sailor who was also disgruntled with the Navy, made internet searches just prior to the Bonhomme Richard blaze regarding “fire color heat scale” and could be linked to graffiti scrawled in portable toilets on and near the ship that read, “I did it. I set the ship on fire. (Expletive) the ship.”

Jones said that sailor was investigated, but the only way he could have set the blaze was with some sort of timed delay ignition, which he said there was no evidence of.

Another sailor alleged Mays admitted to setting the fire after he was arrested, though Torres alleged the prosecution was twisting a statement laced with sarcasm. The attorney said that after repeatedly denying his role in the fire during a lengthy interrogation, Mays was arrested, and finally said, “I’m guilty. I did it, I guess.” 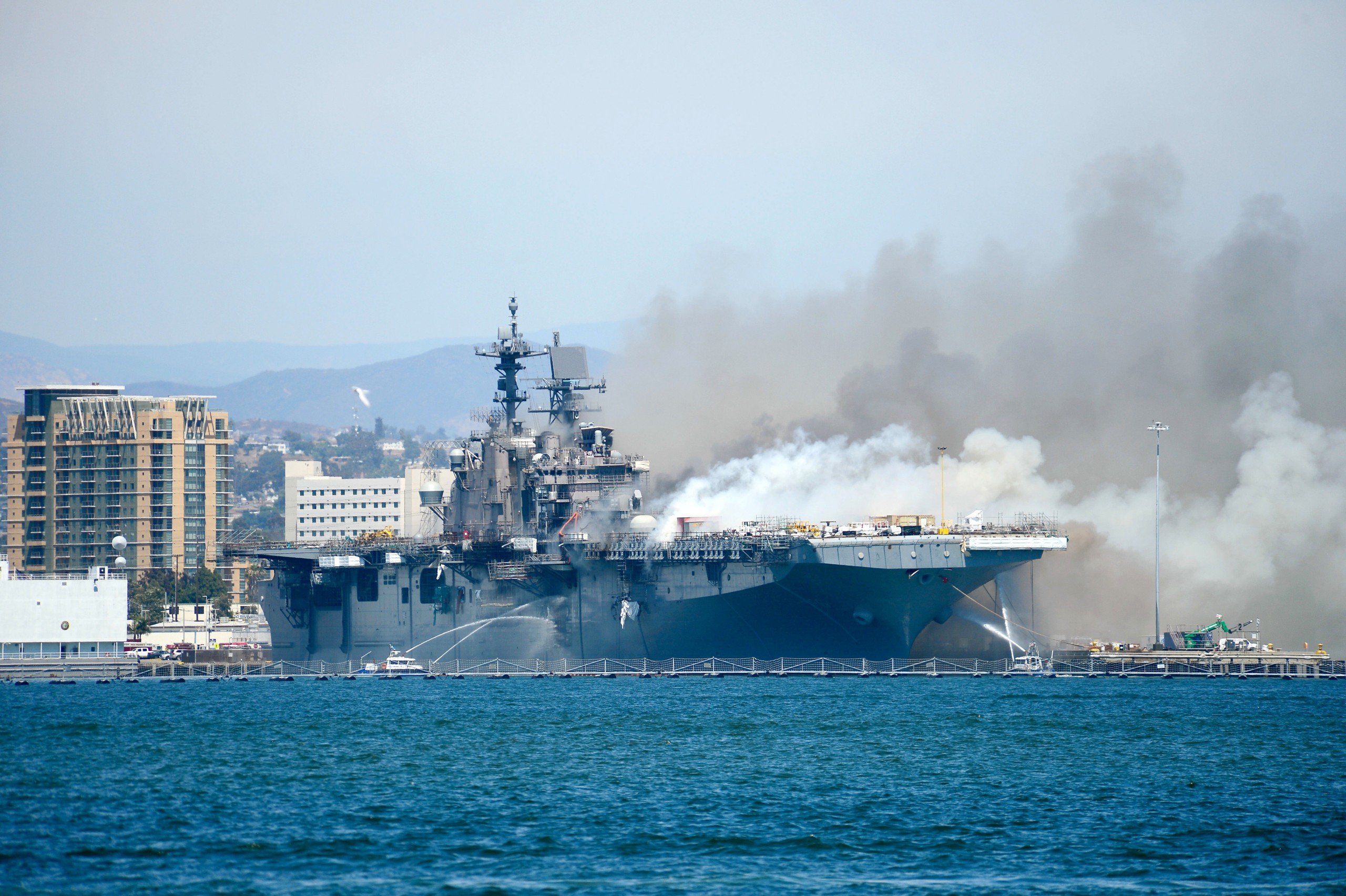