SAN DIEGO (KUSI) – The San Diego County Board of Supervisors Wednesday unanimously approved a new policy to construct affordable homes through a voucher program. As proposed by Supervisors Terra Lawson-Remer and Nora Vargas, the Health and Human Services Agency director will develop a plan to expand project- based vouchers, which will include:

— an analysis of voucher attrition rates and transfers, projected fair market rents and the number of available vouchers over a five-year period;

— analysis of the voucher waitlist system; and

— awarding vouchers for housing projects near high-transit areas, and that use sustainable building materials and sustainable design principles.

The county’s Housing Authority board — as part of a combined meeting with the supervisors — also voted in favor of the proposal. Lawson-Remer said that while supervisors discussed the housing crisis during Tuesday’s meeting, “for far too long, we have not taken that leadership” by failing to utilize available tools. The voucher policy will address production, rather than waiting for the market to step in, she said.

Vargas said the county has the responsibility to expand more affordable housing options, which is part of her “families and communities first” agenda that also includes supportive services. Supervisor Joel Anderson said that while he supports the voucher policy, he wants it re-evaluated next year. 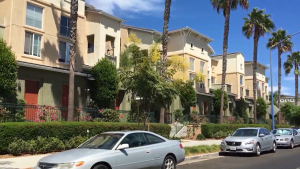 “If we go along this path, and it doesn’t produce…  it doesn’t do anything good for any district,” Anderson said, adding that just pulling building permits isn’t enough. “I wanna move — I wanna get people into homes,” he said.

According to information posted to the board agenda, in the last 10 years, the region has “only produced enough very low-income housing to meet 10% of the need,” and 32,000 very low-income units are needed for residents making under $54,000 per year.

Project-based vouchers “are an underutilized resource administered by the Housing Authority of the County of San Diego which can be strategically deployed to create new affordable housing opportunities in low-poverty, resource-rich neighborhoods and create dedicated housing for vulnerable populations such as low-income families, older adults, people with disabilities and people who are formerly homeless,” according to the county. Wednesday’s action follows the board’s approval late Tuesday of several policies to construct homes for working families without building in rural areas close to fire risks.

As proposed by Lawson-Remer, the policies will address land and construction costs, incomes/wealth gaps and a lack of regional solutions. They include:

— having the county acquire properties and set them aside for housing;

— fast-tracking and reducing red tape for green and affordable housing projects; and

— creating a permanent regional fund to serve as a financing source for developers and those wanting to buy a home.