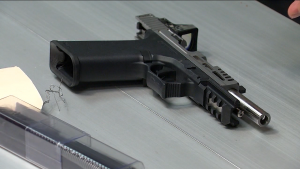 SAN DIEGO (KUSI) – The San Diego City Council passed an ordinance Tuesday intended to crack down on firearms without individual serial numbers — so called “ghost guns” — and work to combat their proliferation on the streets.

The ENUF Ordinance passes and will officially become law in the City of San Diego! Thank you to my colleagues and all the gun violence prevention advocates for supporting this effort to close the ghost gun loophole and keep our communities safe. @GvpSd4 @bradybuzz @KrisB_Brown https://t.co/lIvlX0MFx4

The Eliminate Non-Serialized Untraceable Firearm ordinance — introduced by Councilwoman Marni von Wilpert — is intended to ban ghost guns by making it illegal to sell unregistered gun kits in San Diego online or in stores. The ENUF ordinance will become law on Oct. 14.

“The spread of untraceable ‘ghost guns’ is fueling gun violence in our city and today’s vote will help keep firearms out of the hands of people who pose danger to our communities — including violent criminals, domestic abusers, individuals suffering from mental illness and terrorists,” von Wilpert said. “I hope the ordinance will inspire San Diego’s regional municipalities, the state of California and ultimately the federal government to act to close the ghost gun loophole once and for all.”

Ghost guns, sometimes referred to as “do-it-yourself-guns,” are homemade, personally manufactured firearms that lack commercial serial numbers and can easily become untraceable due to the lack of identifying markings.

People who are prohibited from lawfully possessing firearms can avoid background checks by legally purchasing the unfinished parts of a gun, such as unfinished gun frames or receivers, and then assemble an unregistered ghost gun at home.

These gun kits are sold by manufacturers, secondary retailers and websites, and there are numerous websites and videos online that explain how to complete the assembly process with minimal effort.

The ordinance was introduced after an April 22 shooting that killed a man outside a hotel in the Gaslamp Quarter, in which a ghost gun was used. The suspect, a convicted felon prohibited from owning firearms, also allegedly shot and wounded several other people nearby before being tackled by bystanders and arrested.

A first reading of the ordinance passed 8-1 in August.

According to a San Diego Police Department report, gang-related violent crime increased in the first six months of 2021, including a 129% jump in gang-related shootings when compared to the same period last year, which saw a significant drop in most violent crime due to COVID-19-related lockdowns.

“The increased violence our communities are experiencing is cause for new measures to address it,” Police Chief David Nisleit said before the first vote in August.

“Our Violence Reduction Plan and new Ghost Gun Team will combine proactive policing with special investigations to use knowledge and expertise to find those who are causing this violence and stop it before it happens. Every San Diegan deserves to feel safe, and we believe these efforts will help us in reaching that goal.”

Nearly 20% of weapons seized as part of criminal investigations during the first half of the year were ghost guns, police said.