SAN DIEGO (KUSI) – KUSI News launched the Prep Pigskin Report on September 3, 1999. The first iteration of the program consisted of three full-time employees and four freelancers. The original PPR ran 30 minutes in length, and on a good night, featured highlights from 12 games.

Mt. Miguel star Jahiem Allen-Pompey and KUSI’s Paul Rudy were both recognized by Chairman Greg Cox and the Board of Supervisors during “The Prep Pigskin Report” day proclamation. Allen-Pompey set a San Diego Section record and led the state in receiving yards in the 2019 season. He spoke to Allie Wagner shortly after the ceremony about how PPR impacted his life and what it meant to be showcased by them during his high school career.

The current Prep Pigskin Report program runs 65-minutes in length, and features over 20 of the best games from each week in San Diego County.

The success of the PPR has created additional programming like the ‘1st & 15’ and the ‘PrePR.’ The ‘PrePR’ is a pre-kick off show that is in built inside the KUSI News at 4, 5 and 6 pm. The 1st and 15 is a 15-minute highlight show that runs at 10:45 PM and transitions seamlessly into the 11:00 PM Prep Pigskin Report.

KUSI News is the ONLY local TV affiliate in the United States that preempts it’s Friday night newscasts in favor of an hour long high school football show. KUSI’s Prep Pigskin Report frequently attracts bigger viewership than some of its competing local newscasts on Friday night.

If you haven’t seen it, the PPR is much more than highlights. The Prep Pigskin Report features a half dozen weekly pre-produced features.

KUSI News features segments within the Prep Pigskin Report like the ‘Student Athlete Spotlight’ which shines a light on young athletes making a difference in the classroom and in their communities. The ‘Pigskin Idol’ offers wannabe sports journalists the chance to make their TV debuts live on the PPR. The best bands in the land are featured in our ‘Marching Scoreboard’ segment, and the county’s Top Recruits are invited into the studio for late night live interviews.

The PPR season culminates every December with the Silver Pigskin Gala. The PPR Gala started as a live in-studio ceremony with a guest list of less than 75 people, but now has grown into a full blown TV production aboard the USS Midway Museum.

Bottom line, in a time when our society is increasingly divided, the Prep Pigskin Report is unique in that it crosses over all social economic barriers; private schools, public schools, rich, poor, white, brown or black it doesn’t matter. What matters is the common love we all have for high school football, and a program that showcases that love and our local youth like no other.

KUSI’s Paul Rudy, AKA PPR Papa Pig, created the PPR and has been the man in charge since its inception in 1999.

Hey All,A big thank-you for the kind notes, texts and calls. It means a lot. It’s a surreal experience standing in… 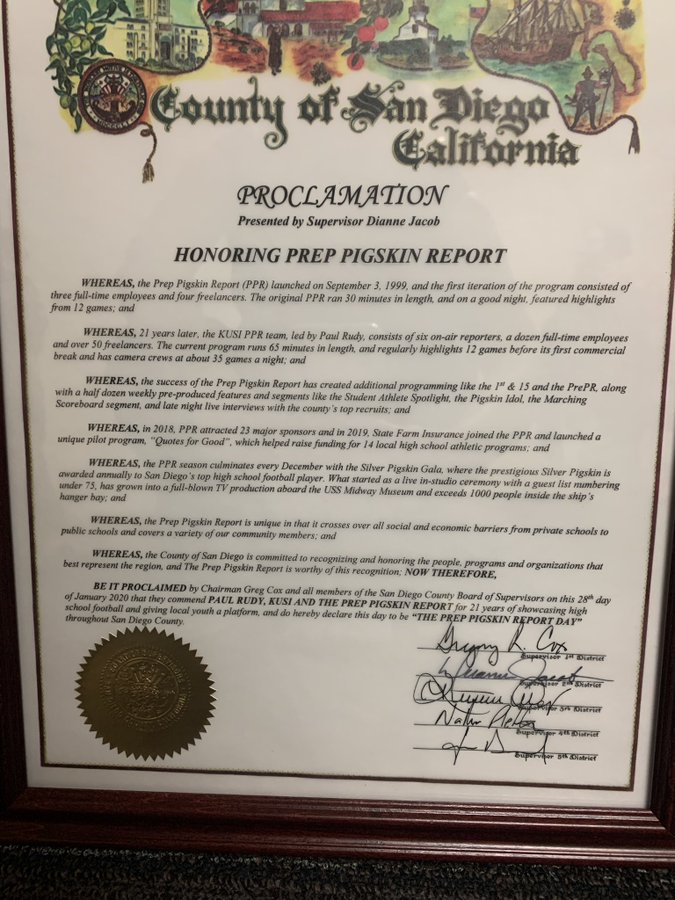 The #SanDiego County Board of Supervisors has dedicated January 28th, 2020 as #PPRDay!