SAN DIEGO (KUSI) – KUSI News has been informed by various law enforcement officials that they “have not been authorized by San Diego County to get our officers vaccinated.”

The Chula Vista Police Department says their City Council have “made calls to County of San Diego Board of Supervisors in an attempt to get our officers authorized to be vaccinated,” but have not been successful.

CVPD says several other counties up and down the state of California have already authorized their law enforcement officers to get vaccinated, and wonder why the San Diego County Supervisors won’t do so.

President of the Chula Vista Police Officers Association, David Martinez, joined KUSI’s Jason Austell on Good Morning San Diego to explain why so many law enforcement agencies, including his, are frustrated with Supervisor Nathan Fletcher’s refusal to grant them authorization.

Martinez said, “as police officers we do much more than just give out tickets and arrest people, we help people in the most difficult days of their lives, and everyday we have officers that are unvaccinated responding to radio calls to assist citizens at their homes, and going inside these homes.”

Supervisor Fletcher responded saying, “we want them to get their vaccines, and we certainly want them to get it as quickly as possible. We are presently following the guidance which is to do healthcare workers, and individuals 65 and older. ”

KUSI followed up saying, “Do you understand their frustration because they are going out saving lives, doing CPR? And especially Chief Kennedy, who is frustrated that her men and women aren’t being vaccinated?”

Supervisor Fletcher responded saying the county “has established guidance from the federal government and the state government, that we have to follow. And that says you have to do healthcare workers and 65 and older, and then you can move into that first tier of essential worker and those first responders are in that first tier.”

KUSI asked if it was true that law enforcement officers in Orange, Marin and Riverside counties are being vaccinated. Supervisor Fletcher responded saying, “you would have to ask those counties.”

KUSI News was able to reach the Governor’s office to find out whether or not uniformed officers can get the vaccine. Darrel Ng, member of the state’s COVID-19 Task Force, responded explaining, “at this point, counties have the discretion in who they are vaccinating. The state provides guidance and the local health officer has the ability to accept/modify at his or her discretion.” 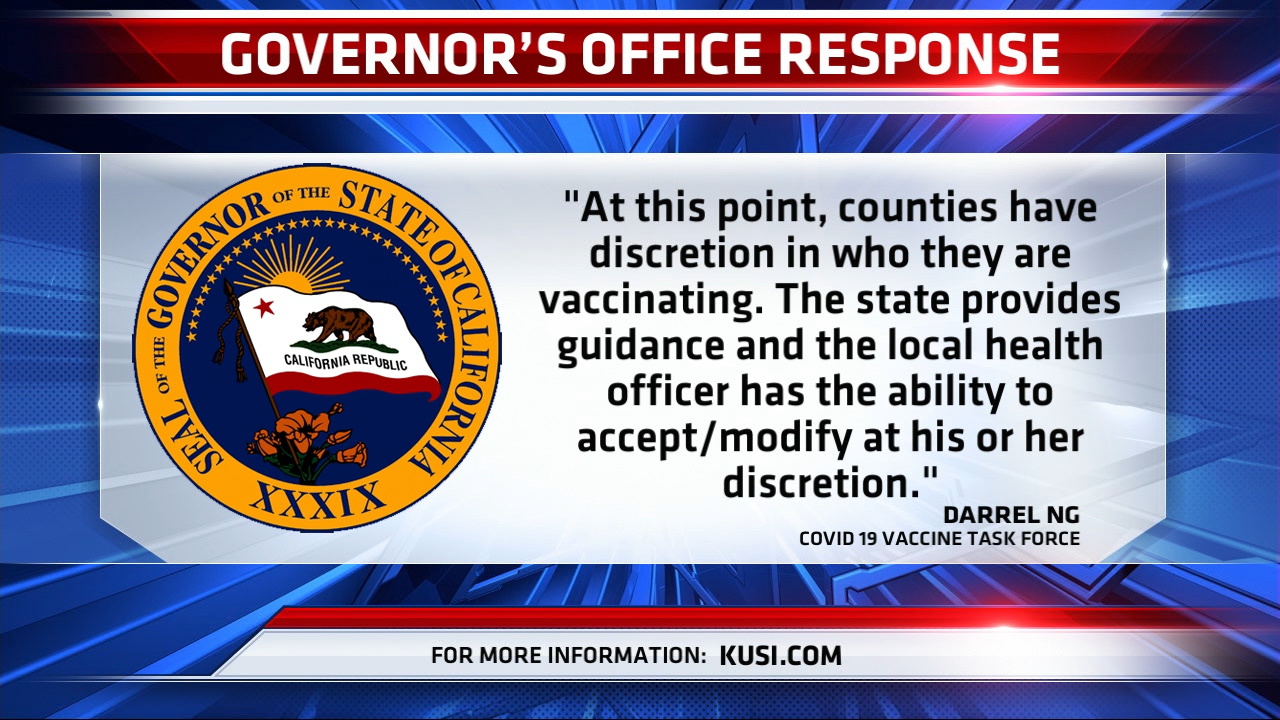 Supervisor Fletcher’s full response to KUSI’s question is below: