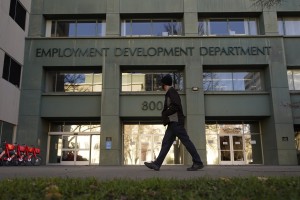 FILE – In this Dec. 18, 2020, file photo, a person passes the office of the California Employment Development Department in Sacramento, Calif. On Tuesday, Jan. 26, 2021, California State Auditor Elaine Howle released a report saying that the EDD might have overpaid millions of people since March 2020 after it stopped enforcing eligibility rules so they could process claims faster. (AP Photo/Rich Pedroncelli, File)

The defendants are charged in two separate indictments with submitting fraudulent claims to California’s Employment Development Department, which administers unemployment benefits for those affected by the COVID-19 pandemic.

In one case, a former hospital employee, 52-year-old Matthew Lombardo of San Diego, is accused of stealing confidential patient files and providing them to three co-defendants to submit to EDD.

The indictment alleges Lombardo worked as a patient service representative and identifies the hospital Lombardo worked at only as S.H. However, Scripps Health confirmed that Lombardo did work for the healthcare system and was fired in April.

The indictment alleges that Lombardo shared the names, dates of birth, addresses, social security numbers and other identifying information of patients with his co-defendants.

In the other case, five defendants — including Genetti — are accused of filing 108 separate claims to EDD, which paid out more than $1.6 million collectively.

Besides Genetti, the defendants in that case are Lindsay Renee Henning, 37, of La Mesa; Garret Carl Tuggle, 35, of San Diego; Salvatore Compilati, 39, of La Mesa; and Juan Landon, 27, of Mesa, Arizona.

The U.S. Attorney’s Office said all but Landon have made their initial federal court appearances.

“Pandemic unemployment insurance programs are a critical part of our safety net designed to support hardworking citizens who are suffering during an unprecedented economic downturn,” said Acting U.S. Attorney Randy Grossman. “Our office and our law enforcement  partners will investigate and prosecute individuals who attempt to steal from these programs designed to assist deserving recipients.”