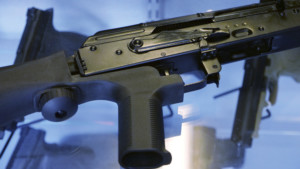 SAN DIEGO (KUSI) – The San Diego County Board of Supervisors voted 3-2 Tuesday to approve an ordinance requiring safe firearm storage and prohibiting the distribution or creation of untraceable “ghost guns” in the county.

Board Chairman Nathan Fletcher and Supervisor Terra Lawson-Remer backed the proposal last October, and they were joined Tuesday by Supervisor Nora Vargas in support of the measure. Supervisors Joel Anderson and Jim Desmond were opposed.

Ghost guns are unregulated firearms that lack serial numbers by which they can be identified and are typically assembled from purchased or homemade components. Minors or those normally prohibited from owning firearms can purchase such a weapon without a background check.

The county ordinance will:

— update definitions regarding firearms to include unserialized ghost guns and parts;

— prohibit the possession or distribution of parts without serial numbers that are used in the creation or possession of ghost guns;

— prohibit 3D printing of firearms or parts; and

— require the safe storage of firearms.

According to Fletcher’s office, unlike state law, the new ordinance includes the parts of ghost guns in the definitions and prohibitions “because the gun parts are designed to be easily assembled and can quickly become as dangerous as a completed gun.”

Supervisors also requested an annual report, based on a suggestion from Desmond, on the impact of gun violence within the county.

“Enacting stronger safety measures for gun storage and reducing the possibility for more unregulated firearms to be distributed in our neighborhoods is another important step toward fulfilling our obligation to help protect San Diegans from unnecessary gun violence,” Fletcher said in a statement after the meeting.

Desmond said that while he opposed ghost guns because they’re a danger to society, such weapons are already illegal. When it comes to requiring a serial number for every part of a gun, “the good guys are gonna do that,” Desmond said. “The bad guys won’t.”

Desmond added that California has safe-storage laws, and said there are some 300,000 laws that cover firearms nationwide. He said he wanted an annual report on how the ordinance is working, including if it results in any accidental deaths.

“Let’s see if this local ordinance makes a difference in taking guns away from the bad guys,” Desmond said.

In a statement after Tuesday’s meeting, Anderson said he “does not believe that the ghost gun ordinance will have a positive impact on crime, nor make our communities any safer.”

Lawson-Remer said ghost guns fuel “an epidemic of violence across the nation,” and added that she has spoken to parents who are terrified about their children’s safety in school because of gun violence.

During a public comment period, nine residents called in; eight were in favor of the ordinance and one was opposed. Proponents urged the board to carry out a robust public outreach campaign, so residents fully understand the ordinance.