Supervisors Joel Anderson sponsored the proposal backing Senate Bill 248 and voted in favor of it, along with colleague Jim Desmond.

The bill would require that court proceedings remain public for the civil commitments of Sexually Violent Predators — or SVPs — offenders convicted of sexually violent offenses and diagnosed with a mental disorder that makes them likely to re-offend, according to Sen. Patricia Bates, R-Laguna Niguel.

“District Attorney Stephan and I believe that court hearings for sexually violent predators should be open to the public whenever possible,” Bates said at the time. “Victims, their families, and the public have the right to witness hearings regarding the potential release of a predator. I look forward to working with the district attorney and my legislative colleagues to update the law to improve transparency in our courts.”

During Tuesday’s board meeting, Anderson said when Stephan came out in favor of SB 248, that made him eager to support it.

Stephan said the bill is supported by the California Newspaper Publishers Association.

“Open courtrooms distinguish our American democracy,” she said, who added that shut courtrooms only “re-victimize victims. There’s no transparency.”

“This is a fair and balanced law that protects everybody’s rights,” she added.

Members of the public, several of them sexual assault survivors, called in to voice their support. Mary Taylor, of the Your Voice Has Power victims’ rights group, said she personal leave time to get off work to attend the hearing of the assailant who harmed her.

Taylor added that she spent hours in a courtroom hallway, only to find out that the judge decided to close the proceedings, “with vague references to plaintiff’s right to privacy.”

By closing the court, Taylor said the judge shut off access to information. “It was devastating to realize that my rights did not matter at all, just like they didn’t to my assailant when he broke in and attacked me at knifepoint,” Taylor said.

She added that SB 248 also would hold courts accountable for timely decisions and give victims “the opportunity to gain back their power.”

Amy Hoffman, a deputy public defender in San Diego County, urged supervisors to vote no on the SB 248 measure.

Sexual violent predator court hearings are conducted after years of treatment, and “nowhere is there a greater need to protect the psychotherapist/patient privilege,” Hoffman said.

Without protections, offenders may not cooperate during treatment, Hoffman said, adding that SVPs on conditional release have around-the-clock supervision.

It’s important that there be flexibility for the right to privacy on treatment options for offenders, Lawson-Remer said.

“I’m concerned this bill would have a counterproductive impact and do more harm than good,” she added.

Supervisor Nora Vargas said she was not taking her vote against supporting SB 248 lightly, and appreciated the sentiment behind it. However, Vargas said she was also concerned about privacy rights, because the proposed law would strip away ability to use discretion on closing hearings.

Board Chairman Nathan Fletcher also voted no, but did not publicly discuss his reason for doing so. 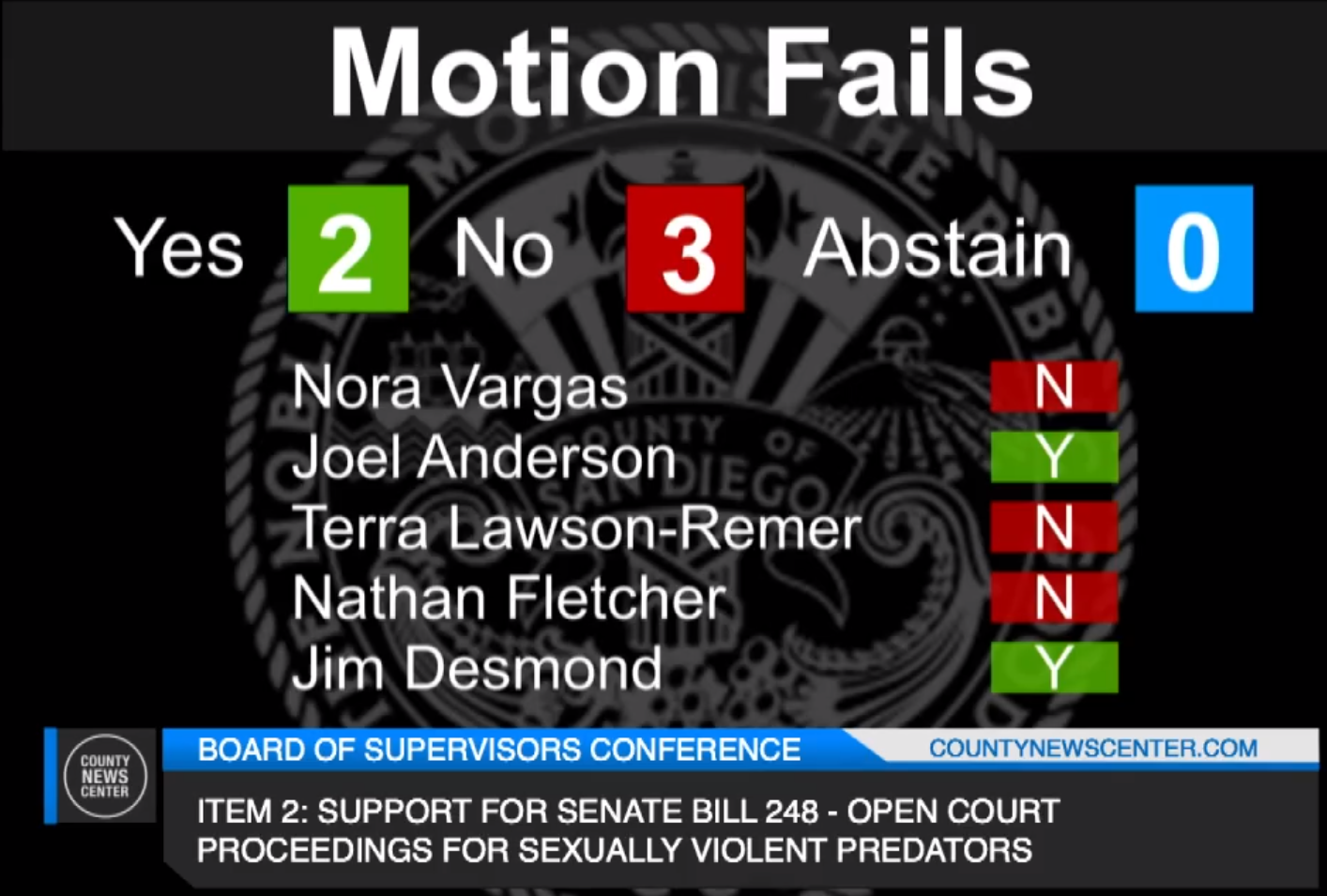