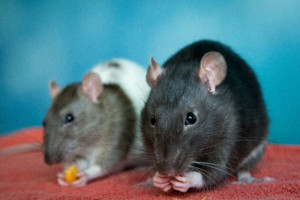 SAN DIEGO (KUSI) – It’s the Year of the Rat and the San Diego Humane Society still has more than 40 of the critters across its three campuses waiting for adoption, it announced Monday.

In October 2019, a woman called the Humane Society and said her pet rat population was out of control. She gave up more than 300 rats, and as many were pregnant, the Humane Society soon found itself with more than 600. Officials say the vast majority have been adopted, but there are still dozens of pet rats waiting for homes at the society’s San Diego, Oceanside and Escondido campuses.

The society said rats make excellent pets as they are social, intelligent and affectionate with humans. Domesticated rats are physically and psychologically different from their wild counterparts.

Rats eat pellets, vegetables and fruit, and stay clean by grooming themselves like a cat several times a day.

The San Diego Humane Society is offering a “Year of the Rat” special adoption fee of $5 for a pair. As rats are social animals, the society requires they be adopted in same-sex pairs unless they are joining a rat in your home.