SAN DIEGO (KUSI) – Following several attempted rescues of wild animals caught in glue traps earlier this year, the San Diego Humane Society’s Project Wildlife team Wednesday urged the public to refrain from using the traps due to the devastating consequences they have for wildlife, and sometimes pets. 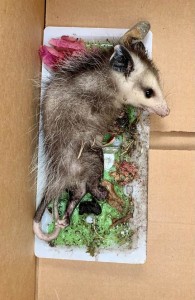 The medical team at the Pilar & Chuck Bahde Wildlife Center works on wild animals who are found stuck in glue traps. According to a statement from center staff, without rescue, these animals experience prolonged suffering and death, often from starvation.

“Glue traps are incredibly inhumane since the traps themselves don’t kill the animal,” said Dr. Jon Enyart, director of wildlife medicine for SDHS. “The animal gets stuck and is left unable to move until they starve to death. It is devastating.”

On April 29, a barn owl arrived at the Bahde Wildlife Center with most of her feathers saturated in glue. It is unknown how long the bird had been stuck in the trap, but she was extremely fatigued when she arrived, veterinarians said. The owl received two medicated baths to remove the contaminant, as well as pain medication and fluid therapy as part of her treatment plan.

Despite the medical team’s efforts to save her life, the owl was not able to recover and died in care.

On April 24, an orphaned joey opossum arrived at the wildlife center, also stuck in a glue trap. The animal’s body was fully attached to the tray, which would have meant a very slow death had she not been found and brought to the Project Wildlife team for care. She responded well to treatment and after two weeks in care, was released back into the wild.

Many of the animals who get stuck in glue traps are not invasive to humans, SDHS officials said. Owls control the pest population as their prey includes rodents and insects. Opossums eat rats, mice, snails, slugs and insects, as well as rotten fruit and vegetables — they will even eat rattlesnakes and ticks.

Opossums and owls are also nocturnal. They are relatively disease-free and it is extremely rare for them to carry rabies, parvovirus or distemper, SDHS veterinarians said.