SAN DIEGO (KUSI) – A federal judge has voided the Biden Admin’s federal mask mandate, and major airline companies immediately announced they would no longer be forcing their passengers to mask up on board.

“The decision Monday by U.S. District Judge Kathryn Kimball Mizelle in Tampa also said the Centers for Disease Control and Prevention improperly failed to justify its decision and did not follow proper rule-making,” the Associated Press reported. “The CDC recently extended the mask mandate, which was set to expire on April 18, until May 3 to allow more time to study the BA.2 omicron subvariant of the coronavirus that is now responsible for the vast majority of cases in the U.S.”

In response, San Diego MTS immediately released a statement that said they will await guidance from the federal government, instead of ditching the mask mandate. 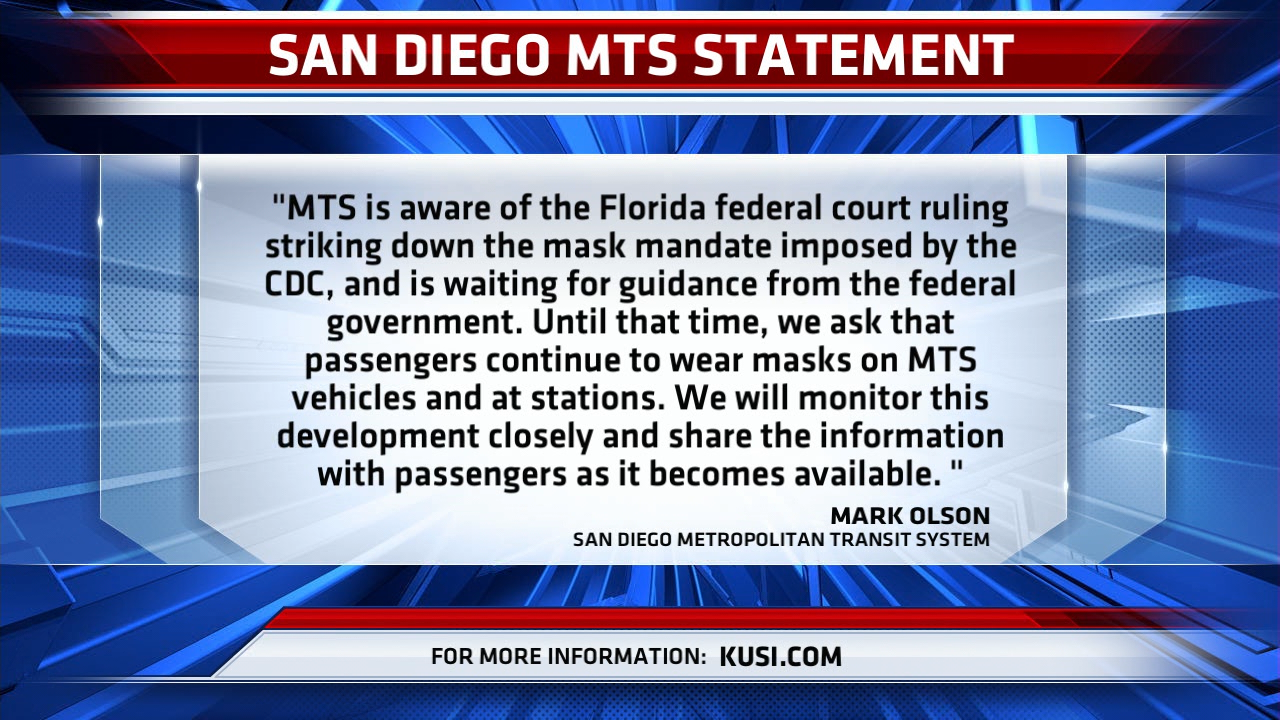 Olson explained, “it’s primarily because we want to get some more information and some more guidance from the CDC, the federal government and other health authorities.” Adding that they “have had this rule in place for the past two years, and it’s worked really well.”

KUSI’s Alvarez also spoke with some transit riders, most of whom don’t think the mask mandates are needed, and admitted they haven’t been obeying them for a while now.

KUSI reached out to Supervisor Nathan Fletcher, Chair of MTS, for comment but we did not hear back.

At the same time, the North County Transit District has lifted their mask mandate, and does not require masks.

Masks are not required on @GoNCTD, but they are on @SDMTS.

KUSI News reached out to MTS Chair @NathanFletcher, but we were ignored.

Why do you think MTS is refusing to lift their mask requirement?

Fletcher has not publicly commented on MTS’ decision, but his wife, former Assemblywoman Lorena Gonzalez tweeted her opposition to ending the federal mask mandate, pointing out her disgust with travelers in San Diego who immediately ditched the masks when the judge’s ruling came out.