SAN DIEGO (KUSI) – City officials today announced the creation of a civic initiative to help San Diegans identify businesses offering support for victims of hate crimes and learn how to report — and potentially prevent — such offenses. 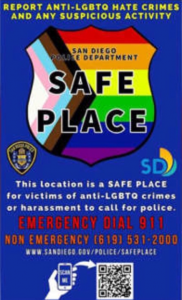 “The San Diego Police Department wants every resident to feel safe when reporting a hate crime that has already occurred or helping us stop crime before it happens by reporting suspicious activity,” Nisleit said.

“The Safe Place Program will help San Diegans visibly know which businesses in their communities they can turn to for help and provide a valuable resource for them to access information about these types of crime,” he said. “Our LGBTQ community has been a great partner in helping us get this program off the ground, and we look forward to expanding it even further in the future.”

Businesses participating in the program will post a window sticker bearing a QR code that can be used to get information on hate crimes and community resources for people often targeted by acts of hate.

“Not only does this program inform people about how to report hate crimes, it shows victims and potential victims where they can find help and support in the community, which can be critical in an emergency,” City Council President Jennifer Campbell said. “We want the LGBTQ community to know where they can be safe and make it absolutely clear that hate has no place in our city.”

Over the past several months, the SDPD’s LGBTQ liaison, Officer Christine Garcia, has worked with members of that community to develop the program for businesses in Hillcrest, North Park and surrounding neighborhoods, with plans to expand it to businesses serving the Asian-American and Pacific Islander communities in the coming months, according to city officials.

“Our LGBTQ businesses — particularly bars, cafes and bookstores — have historically been spaces where people could find community, get connected to resources and feel a sense of safety,” City Council President Pro Tem Stephen Whitburn said. “I am glad to see the launch of the Safe Place program in San Diego starting in some of our LGBTQ venues, as this will become a way for community members who find themselves to be a victim of a hate crime to feel more comfortable in making the report and getting the help they need.”

Chris Shaw, co-owner of Urban MO’s, said he and his colleagues were “honored to be the first to display the Safe Place decal for members of our community to know that MO’s is a safe haven from hate.”

“The San Diego Police Department and Chief Nisleit have done an amazing job at promoting diversity within SDPD — not only for the LGBTQ community, but for all communities in San Diego,” Shaw added. “SDPD is truly listening to our concerns and taking action to address them.”