SAN DIEGO (KUSI) – The San Diego Padres have released their 2020 schedule, with the home opener set for Thursday, March 26 at 1;10 p.m. against the Colorado Rockies. The Padres full press release announcing the release is below.

The San Diego Padres released their schedule for the 2020 regular season today, which features Interleague visits to San Diego by the Chicago White Sox, Cleveland Indians and Minnesota Twins. The team will open the season at home with a four-game series against the Colorado Rockies beginning on Opening Day, Thursday, March 26 at 1:10 p.m. The opening homestand will conclude with a three-game series against the Atlanta Braves from March 30-April 1.

Interleague play in 2020 will bring American League Central opponents to San Diego, as the White Sox (May 11-13), Indians (June 23-24) and Twins (September 22-24) will all make the trip to America’s Finest City. This will mark just the second appearance at Petco Park for the White Sox and Indians—both of which last visited in 2005—and the fourth for the Twins (their fifth in San Diego, last in 2017). The Seattle Mariners will also make an appearance in San Diego (September 1-2) as part of Interleague play. For Interleague road contests, the Padres will visit the Detroit Tigers (April 24-26), Kansas City Royals (July 24-26), Cleveland (August 11-12) and Seattle (September 14-15). The club will visit Detroit’s Comerica Park for just the second time (last in 2005), Kansas City’s Kauffman Stadium for the second time (last in 2002), and Cleveland’s Progressive Field for the fifth time (last in 2017).

Home weekends for the Padres in 2020 are highlighted by series against National League West opponents, including two weekend series against the Rockies, San Francisco Giants and Los Angeles Dodgers, as well as one weekend series against the Arizona Diamondbacks. The Chicago Cubs, Miami Marlins, New York Mets, Milwaukee Brewers, Philadelphia Phillies and Washington Nationals also pay weekend visits to Petco Park. The Padres will host the Giants at Petco Park on Easter (April 12) and the Diamondbacks on Labor Day (September 7).

Please see the attached document for the full 2020 schedule and note that all elements of this schedule are subject to change. The Padres’ complete 2020 schedule is available online at www.padres.com/2020schedule. 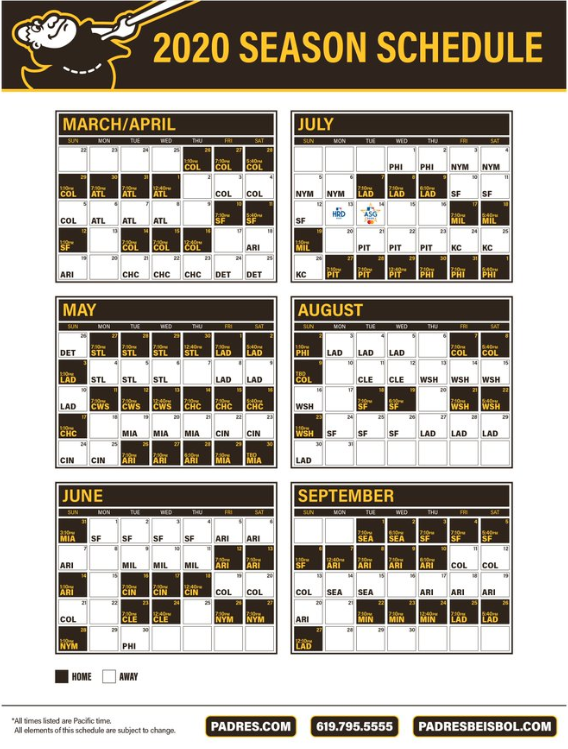