SAN DIEGO (KUSI) – Authorities Monday publicly identified five men who were wounded — one fatally — during a shooting rampage last week in the Gaslamp District by an assailant armed with an untraceable “ghost gun.”

Parking valet Justice Boldin, 28, was standing on a sidewalk in front of Pendry San Diego Hotel in the 500 block of J Street about 10:30 p.m. Thursday when a man walked up to him, pulled a 9mm pistol and shot him without provocation, according to police.

“The (shooter) began to walk away, but quickly turned and fired again at the victim,” Lt. Andra Brown said. 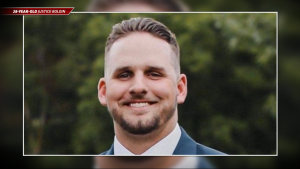 Boldin, an Ace Parking employee, died at the scene.

The assailant then walked off to the north, confronted a group of men in the 500 block of Fifth Avenue and shot each of them.

Following the second barrage of gunfire, two witnesses rushed the shooter and tackled him, then held him for police with the help of other good Samaritans. Officers soon arrived and arrested the suspect, later identified as 32-year-old Travis Fereydoun Sarreshteh of San Diego, following a struggle during which they shocked him with an electric stun gun.

The other two — Alexander Balis, a 26-year-old resident of Mullica Hill, New Jersey; and Jatil Kodati, 28, of Jersey City, New Jersey — were treated for gunshot wounds to their arms.

The group may have been fired on following “some kind of altercation,” according to Police Chief David Nisleit.

“We’re still trying to work exactly that out,” Nisleit told reporters on Friday. “Possibly somebody bumped into somebody and that caused an exchange of words.”

The suspect — who allegedly carried out the shootings with a so- called “ghost gun,” a non-commercial firearm lacking a serial number — refused to provide police with a statement following his arrest, according to Nisleit.

Sarreshteh was booked into San Diego Central Jail on suspicion of one count of murder and four counts of attempted murder. He was being held without bail pending arraignment, scheduled for May 3.

“We have a system in our heads of what to do, we just jumped on him, and we know if someone has a bullet in their arm, we have to stop the bleeding above their veins,” Gino said. “We’ve just been trained for situations like that, and we were able to react a little bit more quickly.”

While they were able to use clothes to stop the bleeding to one of the victim’s arms, they noticed another had been shot in the torso.

“We looked for the exits and we know when someone is shot it can be a back injury,” Benesh said. “So, Shai and I made sure to hold him there and found the exit wound as well.”

In the moments after, they managed to call police and give them a description of the shooter while trying to keep the victims conscious.

“We were just talking with him, trying to keep him with us, keep him alive and said, ‘Stay with us, everything is going to be okay. The paramedics are almost here,” Benesh said. “At one point his eyes started closing, he said he couldn’t breathe, and we just tried to keep him with us.”

These quick actions are why they are being hailed as heroes by the San Diego Police Department, however, they don’t feel like they deserve the title.

They also hope it will lead to more people being aware so they’re ready to respond to a tragedy.

“It’s something to think about and consider because it can happen anywhere, it didn’t happen to us now in the battle field, it happened 5th avenue, San Diego, downtown, outside a club and pizza shop,” Denesh said.

The group is already planning a reunion with the people they helped saved and said it’s the greatest honor of their life to be able to use their training to save a life.