LAWRENCE, Kan. (AP) — Kansas is back on top of the college basketball world after knocking off Baylor in a matchup of Big 12 heavyweights, while the Bears dropped to No. 2 in The Associated Press men’s poll Monday after their nip-and-tuck loss in Waco.

The Jayhawks (24-3, 13-1 Big 12) received 62 of 64 first-place votes from the national media panel to take over the No. 1 ranking for the second time this season. Kansas also was atop the poll for one week in December, when it seemed as if just about every school that ascended to No. 1 promptly lost in a topsy-turvy start to the season.

“We’re a silent team that can make a run late in March,” Jayhawks guard Devon Dotson said after the 64-61 victory on Saturday. “We’re not going to get complacent from this one. We’re going to build off of it.”

San Diego State University has dropped to number 5 in the country after losing a close game to UNLV over the weekend.

Baylor (24-2, 13-1) received two first-place votes and fell to second after its 23-game winning streak came to an end. Gonzaga was No. 3 after a loss to BYU, and Dayton jumped San Diego State for No. 4 after the Aztecs lost for the first time in a week when every team in the top 10 found itself in a new position from last week.

The most notable change, of course, came at the top.

“Baylor is the best team that we’ve played against since I’ve been in the league the last 17 years,” said Jayhawks coach Bill Self, whose team begins its four-game finishing stretch against Oklahoma State on Monday night. “You could look at Oklahoma State in ’04 and you could look at (Texas) Tech in ’19, but I think Baylor has played better than both those teams at the same stage. I don’t know how it’s going to finish, but I certainly feel strongly about that.”

Baylor coach Scott Drew, whose team spent five weeks at No. 1, was equally effusive in his praise for the Jayhawks.

“Kansas has really progressed since the last time we faced them,” he said. “We had a heck of a run. I never thought I’d see anyone do what we did. The Big 12 is so tough. Six straight years we’ve been the number one conference for a reason.” 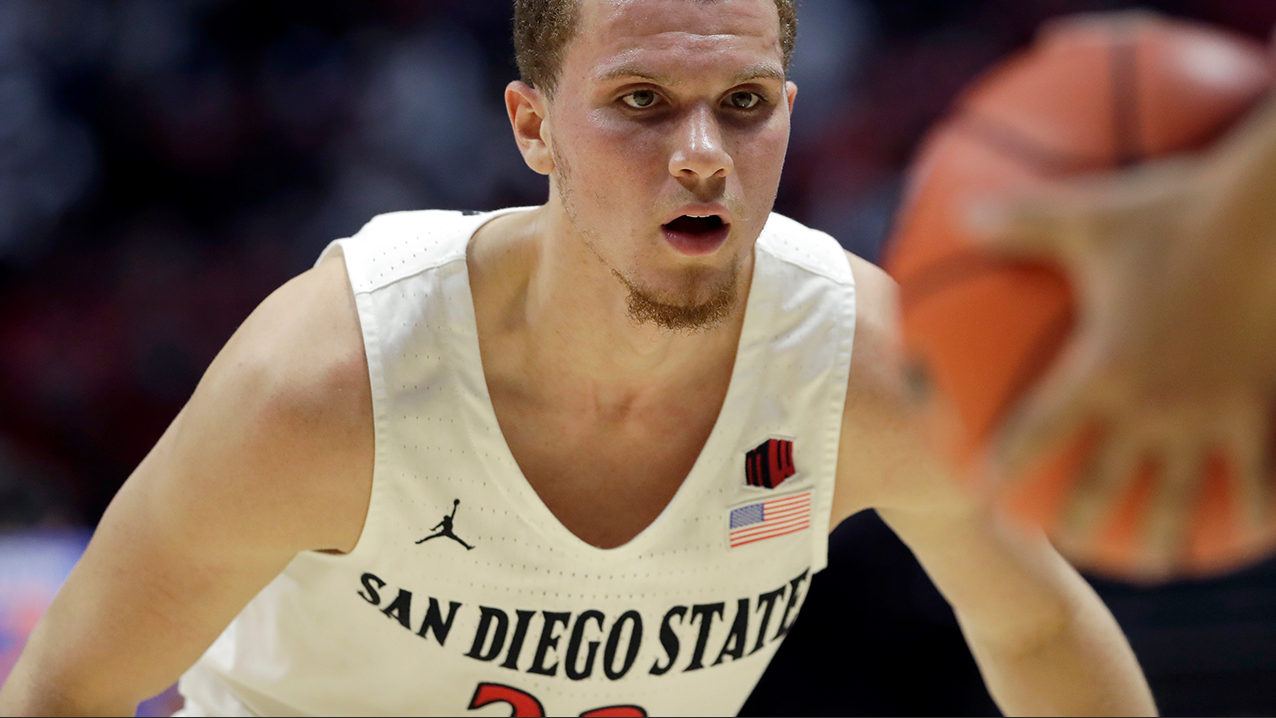 FILE – In this Jan. 11, 2020, file photo, San Diego State guard Malachi Flynn, left, guards Boise State guard RayJ Dennis during the first half of an NCAA college basketball game in San Diego. It’s almost like coach Brian Dutcher and the San Diego State Aztecs won the lottery. Tired of losing at their old schools, big man Yanni Wetzell and guards Flynn and KJ Feagin transferred to San Diego State after being lured by the prospect of winning and going to the NCAA Tournament. And boy, have they ever won, to the point that they’ve matched some accomplishments by the breakthrough 2010-11 team led by the most famous player in program history, Kawhi Leonard.(AP Photo/Gregory Bull, File)

Baylor wasn’t the only team to take its lumps during an upset-filled weekend.

The Cougars continued their climb to No. 17 after they knocked off Gonzaga on Saturday night, while UNLV ended the Aztecs’ perfect start with a 66-63 victory. Two more top-10 teams went down in a Big Ten shakeup Sunday when Maryland lost to Ohio State and Penn State lost to Indiana for its second defeat of the week.

“We lost, and it’s the first time it’s happened (this season), so it doesn’t feel good,” San Diego State guard Malachi Flynn said. “We were all just trying to win the game, and it’s just played out the way it played out.”

The Flyers (25-2) have won 16 straight to reach their highest standing in the poll since finishing third during the 1955-56 season, while the Aztecs (26-1) remain the nation’s only one-loss Division I team. They were followed by Florida State, Duke, Kentucky, Maryland and Creighton in rounding out the top 10.

The Seminoles climbed two spots ahead of their high-profile ACC showdown with No. 11 Louisville on Monday night.

“Florida State is just a team, they’re all really big, really long and really athletic,” Cardinals star Jordan Nwora said. “We’re going to pressure them, use the lane, and I feel pretty confident going into this game.”

The Blue Jays climbed from No. 15 into the top 10 for the first time since the 2016-17 season after beating then-No. 19 Marquette and then-No. 21 Butler last week. Their streak has moved them to within a game of Seton Hall — which climbed from No. 16 to No. 13 this week — in what has become an intrigue race for the Big East title.

The biggest jump this week came from BYU, which followed a victory over Santa Clara with a resounding 91-78 win over Gonzaga. The Cougars climbed six spots to No. 17 with their eighth straight victory.

Michigan shot back into the Top 25 at No. 19 this week after the Wolverines ran their winning streak to five straight and seven of eight with victories at Purdue and Rutgers. Texas Tech and Michigan State also returned to the poll with the Red Raiders at No. 22 and the Spartans at No. 24.

Marquette tumbled from No. 19 all the way out after losing to Creighton and unranked Providence. Butler fell out from No. 21 and Arizona from No. 24 after the Wildcats lost in overtime to Oregon on Saturday.