SAN DIEGO (KUSI) – San Diego State University is in the process of creating a new mascot.

The longtime ‘Aztec’ imagery and ‘Monty Montezuma’ may be no more.

Tuesday, the SDSU Senate passed a resolution calling for a commission to propose at least two Kumeyaay-named animals to be the new official mascot. 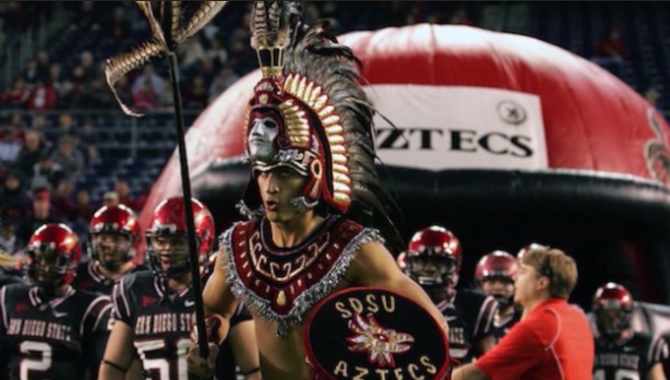 The resolution will not “replace the Aztec moniker or name,” but rather the Aztec Warrior imagery associated with the school.

This is just the latest of many failed attempts by students, faculty and alumni to change something that people have not had any issues with for decades.

SDSU’s website says in 1925, “the student body voted to adopt the Aztec moniker. The decision to choose the Aztec as a moniker was in conjunction with preliminary plans to move to a new campus and was done in unison with changing the name of the school newspaper to ‘The Aztec’ and featuring a yearbook with prominent Aztec symbols.”

Then in 1941, for the first time, “a student portrayed an Aztec in a football game skit. The character became known as ‘Monty Montezuma.'”

San Diego State University provided KUSI News with the following information in response to this story:

A proposal, brought forth by the San Diego State University Senate Committee on Diversity, Equity and Inclusion, was discussed during the May 4 University Senate meeting. To provide clarity: The proposal is not to replace the Aztec moniker, but to form a task force to develop recommendations for a new mascot to replace the Aztec Warrior. The Aztec moniker and the SDSU Aztec name would remain. Under the Senate subcommittee’s proposal, additional community discussions would begin to identify additional imagery to serve in place of the warrior, under thei Aztec name, and that imagery would be put forth as recommendations for review.

Following the Senate meeting, members of the Aztec Identity Education Committee and the Aztec Identity Governing Committee, as well as other university committees, will also engage in discussions through SDSU’s shared governance process toward decision-making relating to building on our Aztec identity and the development of future iconography to serve in the space of a university mascot.

In May 2018, SDSU announced that the university will retain the Aztec name, but will no longer refer to the Aztec as the university mascot. As a reminder, following the conclusion of the 2018 Aztec Identity Task Force and their subsequent report, visible changes were immediately made to the Aztec Warrior to achieve a respectful portrayal of a powerful figure from Aztec culture. Importantly, SDSU no longer has a university mascot; the Aztec name is not a mascot. The university has since retired all references or uses of the Aztec moniker as a mascot in university spaces and, over more than two years, has introduced resources, programs and other initiatives (including those detailed below) designed to enhance Kumeyaay education and recognition, in particular.

The 2018 decision followed many months of meetings by the task force group, the review of thousands of survey submissions and commentary from students, faculty and staff, alumni and members of the greater San Diego region.

Over the last three years, SDSU has also:

Additional strategies which honor our strategic location both on the U.S.-Mexico border and on Kumeyaay land are the university’s strategic plan, which has a planned partnership with Kumeyaay Community College.

As further noted in the 2018 report referenced above, as a federally designated Hispanic Serving Institution (HSI) near the U.S.-Mexico border, SDSU continues to exert its unique capabilities to responsibly “honor the many indigenous people of the region.”