SAN DIEGO (KUSI) – As expected, San Diego County fell back to the most restrictive purple tier of state’s coronavirus tracking system Tuesday, meaning indoor restaurants will have to move to outdoor service only, retail businesses will have to further limit capacity and schools will be unable to shift to in- person learning.

The county’s demotion from the less-restrictive red tier is the result of two weeks of case rates that exceeded the threshold of 7 per 100,000 residents. In recent weeks, the region had an unadjusted rate well above the purple tier guidelines, but a significant effort to increase the volume of tests had allowed for an adjustment to bring it back to the red, or substantial, tier. Testing has decreased slightly and case numbers are on the rise.

Indoor operations in locations such as restaurants, museums, places of worship, breweries and retail businesses will have to either close entirely, move to outdoor operations only or modify in other ways.

After it was announced San Diego County was officially in the Purple, Supervisor Desmond released a series of tweets slamming the State of California for putting thousands of people out of work, and

If we’ve learned anything over the past seven months it’s that this shotgun approach of closing all businesses doesn’t work. Instead, we need to look at where people are getting sick and approach it will a scalpel. Shutting down an entire industry goes too far.

Putting thousands of San Diegans out of work prior to the holiday season is appalling.

The state’s health equity metric, which looks at the testing positivity for areas with the least healthy conditions, increased from 5.3% to 6.5% and remained in the red tier. This metric does not move counties backward to more restrictive tiers, but is required to advance.

Of the 10,608 tests reported Monday, 4% returned positive, raising the 14-day rolling average of positive tests to 3.5%.

Now that @SanDiegoCounty is in the Purple Tier, gyms will be forced to close indoor operations starting Saturday.

To help gym owners, Supervisor @NathanFletcher says to continue paying your gym memberships, "even though you may not be going."

Before getting to questions, Supervisor Nathan Fletcher said San Diego County officials are asking individuals to make sacrifices to their lifestyles, but acknowledged businesses are being forced to make sacrifices.

The graphic below shows the new restrictions that will be implemented on San Diego County businesses at 12:01 AM Saturday morning. 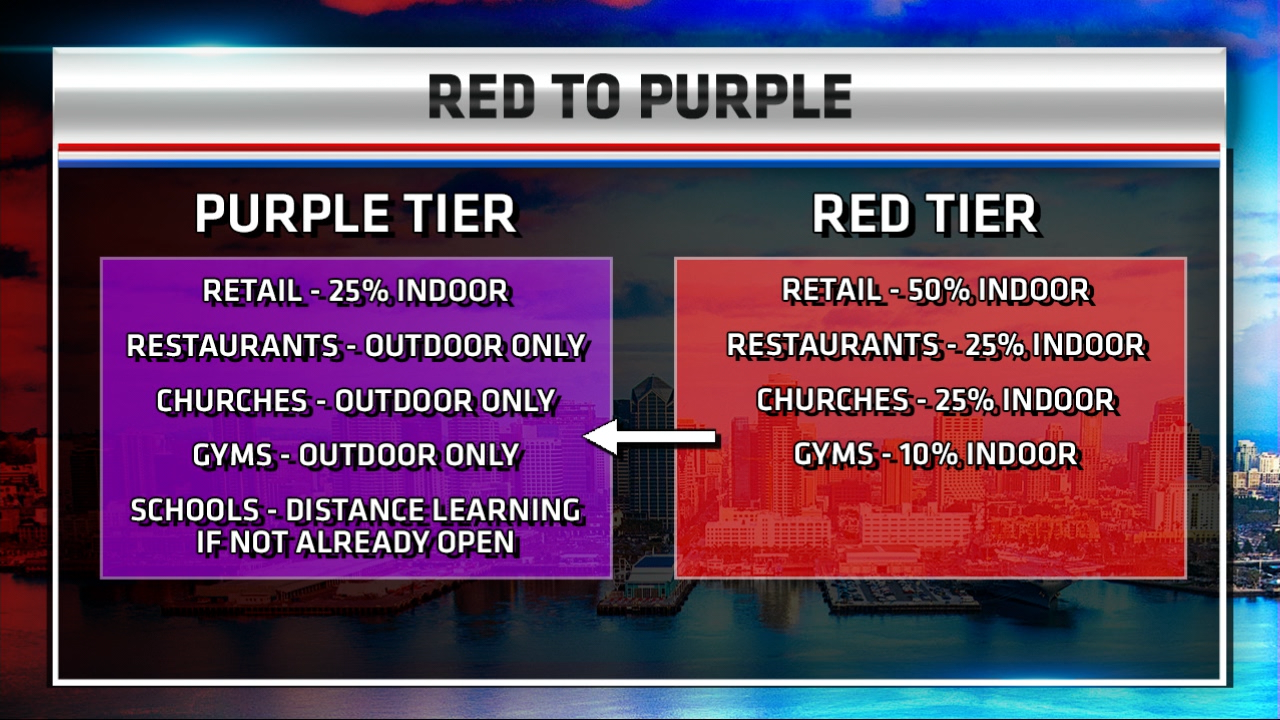