SAN DIEGO (KUSI) – County Supervisors Kristin Gaspar and Jim Desmond are calling on San Diegans to contact their elected representatives to voice their opposition against any modification to the 2004 TransNet Ordinance.

The TransNet Ordinance would take money from unfunded highway projects to develop SANDAG staff’s new vision for a regional transportation plan. Critics says the new vision, as proposed, abandons critical improvements to SR-78, SR-52, and SR-67 that were originally promised to North and East County residents.

Last week, the Board of Supervisors voted 3-2 to oppose the visionary plan put forth by SANDAG’s new Executive Director, Hasan Ikhrata.

Ikhrata joined KUSI News to discuss why we need to address local rapid transit now instead of waiting.

In 2004, San Diegans voted to approve a half-cent sales tax in order to pay for the improvement of these specific roads and highways. Supervisor Gaspar and Supervisor Jim Desmond say the proposed plan is a betrayal of the public’s trust, and a classic bait and switch to the voters.

San Diego County Supervisors Greg Cox and Nathan Fletcher both voted in favor of diverting the funds from improving North and East County roads and instead put the funds towards mass transit projects.

Less than 5% of North County residents use mass transit, and the allocated money is around 40% of the budget. 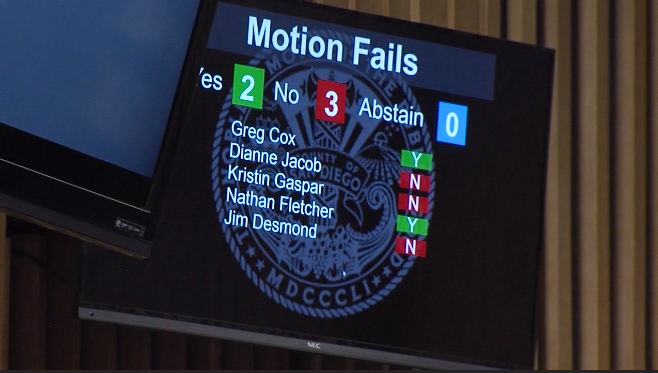