SAN DIEGO (KUSI) – The first Santa Ana windstorm of the fall will elevate fire danger and other public safety hazards in the San Diego County mountains and valleys Thursday and Friday.

The National Weather Service issued a Red Flag warning that will be in effect from noon Thursday to 6 p.m. Friday for those two areas, meaning “critical fire weather” stemming from extremely low humidity is anticipated for the duration of the easterly winds.

According to the Weather Service, a ridge of high pressure settling over the Great Basin in Nevada and Utah will churn up offshore winds expected to be particularly fierce in mountains and passes.

Winds of 20-30 mph are forecast across San Diego County, with isolated gusts as high as 60 mph near coastal mountain slopes, meteorologists said. Humidity will drop to 5-10% Thursday and remain around 5% Friday.

Cal Fire officials stressed the need for people to take basic preventative steps, such as not mowing lawns during high winds, not driving vehicles over extremely dry vegetation, where sparks or hot engine components might touch off a blaze, limiting campfires to designated places and being on the lookout for suspicious behavior that could be arson-related.

The threat was deemed moderate Thursday and Friday, according to the Santa Ana Wildfire Threat Index, which means that “upon ignition, fires will be difficult to control.”

High temperatures Thursday could reach 78 degrees near the coast, 83 inland, 85 in the western valleys, 72 in the mountains and 84 in the deserts.

Temperatures will increase slightly through Saturday, when the winds are expected to be much weaker.

In response to the Red Flag warning, San Diego Gas & Electric has alerted about 34,000 of its customers that it may suspend their electrical service at times over the period to reduce combustion hazards posed by power lines, the utility company reported.

SDG&E advised that it plans to provide updated notifications to customers within 24 hours of an anticipated power-down, and again within one to four hours of a shut-off, if possible.

SDG&E advises those who have received the notification to be prepared, making sure they have such emergency supplies as water, food, flashlights, extra batteries and cellphone battery packs.

Should any precautionary power shut-off last for more than 24 hours, the utility plans to open temporary aid centers where customers can get water and snacks, charge their cellphones, and get updates. 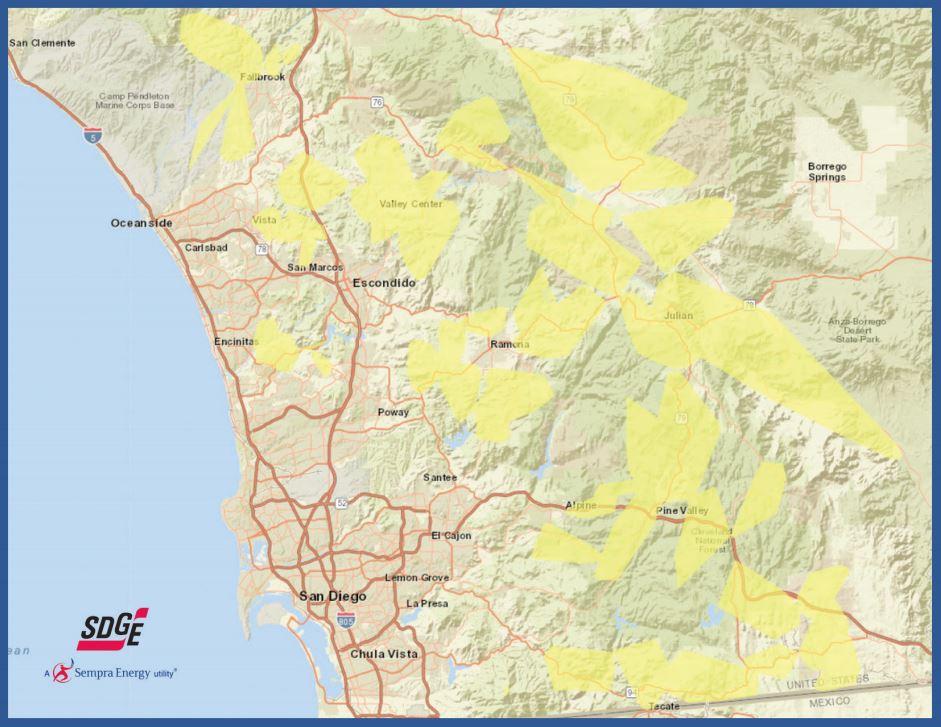 This map is provided for informational purposes only, and outage data on this map are estimates. Some actual outages may fall outside of the shaded areas, and information may change as conditions change.