Santee Wendy’s donates all proceeds made on Oct. 26 to plane crash victims

The reason? Raising funds to help the two families who lost their homes and possessions in the recent Santee plane crash.

The Wendy’s in Santee will donate all sales made at that location Tuesday to the Morris and Campbell families, the crash’s victims.

The location’s address is 9655 Mission Gorge Road and will be raising funds until 10 p.m. Tuesday.

By 4 p.m. Tuesday, the location had already raised 10,000 for the families, according to the location’s owner, Brian Sponberg.

KUSI’s Hunter Sowards was live from the Wendy’s location with more details. 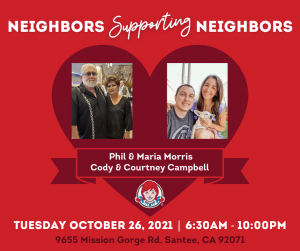 MORE THAN A MEAL: Santee and beyond showed up to support the victims of this months deadly plane crash. All proceeds from the Wendy’s on Mission Gorge Road will be divided between the Morris and Campbell family who lost their home. They have surpassed $10,000 so far! pic.twitter.com/3Uqxl83vE7