SAN DIEGO (KUSI) – A memorial featuring 200 photos of Black people whose lives were lost due to what organizers called racial injustice, police brutality and/or racism was unveiled Saturday at the San Diego African American Museum of Fine Art.

The “Say Their Names” exhibit is free to the public and will be open and accessible daily through July 25.

“It was a very enlightening tribute,” Harris said of the ceremony. “But also with some pain and some grief… and some level of hope. I’m focused on history, but I’m also focused on right now.

“I wish some of the elected leaders would legislate and do policy to honor the people today,” he said. “There’s a lot of work to be done to make sure the lives we’re honoring have not died in vain.”

Gaidi Finnie, executive director of SDAAMFA, called the opening “a teachable moment for all of us. We invite you to come, reflect and think about what you can do to make a difference.” 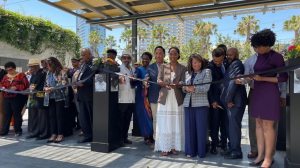 San Diego officials gather to cut the ribbon on the “Say Their Names” exhibit.

The memorial is a nationwide, grass-roots initiative intended to honor Black lives lost in the struggle against systemic racism. The memorial began in Portland, Oregon, and is an outgrowth of the protests that began nationwide in 2020 after the death of George Floyd in Minneapolis.

San Diego will specifically remember the life of Demetrius DuBose, a former NFL player who was shot 12 times, five in the back, and killed by two San Diego Police Department officers in Pacific Beach on July 24, 1999, after an attempted arrest.

DuBose attended the University of Notre Dame, where he was a starting linebacker for the Fighting Irish.

He was selected by the Tampa Bay Buccaneers in the second round of the 1993 NFL Draft. He later signed with the New York Jets and was waived four months later.

The New Children’s Museum will host art activities designed to help children process their thoughts about the exhibit. The exhibit will also celebrate 16 of San Diego’s civil rights advocates.

While the exhibit has been shown in more than 25 cities from Hollywood to Boston, this is the first “Say Their Names” exhibit south of Los Angeles County.