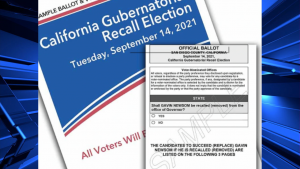 SAN DIEGO (KUSI) – Of the more than 1.96 million mail-in ballots issued for the California gubernatorial recall election in San Diego County, 773,699 have been returned as of Saturday, officials said.

The expected turnout in California for Tuesday’s election was 70%, which would surpass turnout for the 2003 gubernatorial recall election of 66.66%, said Gig Conaughton of the County Communications Office.

There were 131 ballot drop-off locations open around the county, and as of Friday, 104,553 ballots had been dropped off in person.