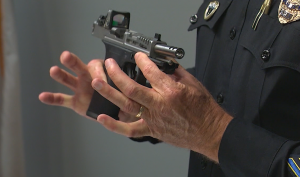 SAN DIEGO (KUSI) – The San Diego County Board of Supervisors Tuesday voted 3-2 in favor of developing an ordinance on so-called “ghost guns” countywide, including banning possession or distribution of non-serial-numbered parts used to build them.

Supervisors also directed Helen Robbins-Meyer, the county’s chief administrative officer, to return within 90 days with a draft ordinance that would also prohibit the 3D printing of unserialized firearms or precursor parts, and establish safe storage requirements for county gun owners.

Over the next 120 days, county staff will also work with community leaders to create preventive gun violence “reduction and disruption” programs.

Ghost guns, also known as “do-it-yourself guns,” are homemade, personally manufactured firearms that do not have commercial serial numbers.

They are untraceable due to the lack of identifying markings and therefore can evade state and federal regulations that apply to firearms, such as background checks.

Board Chairman Nathan Fletcher and Supervisor Terra Lawson-Remer, who proposed the formal ordinance, voted in favor along with Supervisor Nora Vargas. Joel Anderson and Jim Desmond voted no.

“Nothing we do will remove all evil or danger from society,” but Tuesday’s action is a common-sense step, Fletcher said.

Lawson-Remer said that as a mother of a toddler, she doesn’t “want a future where her daughter has to practice active-shooter drills.

“We’re all heartbroken by the constant drumbeat of mass shootings,” Lawson-Remer said, adding that Americans from across the nation have been calling for similar laws.

“With this vote, San Diego County can do more than call for change — we can make change,” she said.

Desmond said that ghost guns are already illegal, and the proposed county ordinance “is just putting another law on top of another law.”

He also noted that people can already purchase guns online.

During a brief public hearing, supervisors heard from residents both for and against the proposal.

McDaniel-Lindsey said communities are dealing with gun violence, and are developing programs to prevent injuries and deaths. “I want San Diego County to be one of these communities,” she added.

Shaun Frederickson told the board that ghost guns are a non-issue, as California has strict gun laws, including a registry. Instead, the county proposal was about Fletcher and others “looking good” and appeasing their (voting) base, Frederickson said.

“In addition, the investment we make in gun violence prevention will be vital to keeping children and families safe by preventing unnecessary deaths to firearms,” Fletcher added.

The city’s Eliminate Non-serialized Untraceable Firearm — or E.N.U.F. — ordinance was signed last month by Mayor Todd Gloria and is slated to go into effect Saturday.